At LBCC, tennis goes and pickleball comes in 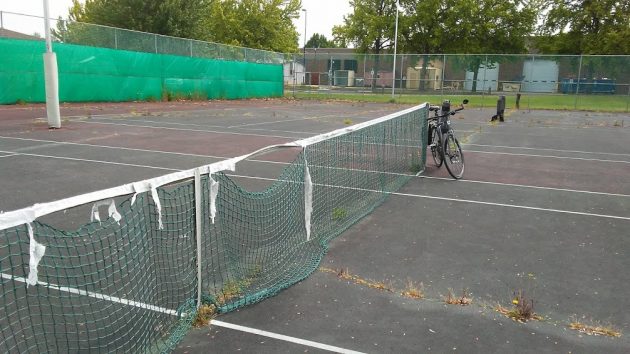 One of two remaining tennis courts at LBCC on Saturday. The courts will be replaced with courts for pickleball.

At Linn-Benton Community College, they haven’t played tennis for years. And now they plan to replace their courts with a pickleball venue that the Albany Parks and Recreation Department will build.

Parks Director Ed Hodney explains the deal in a memo that goes to the city council on Monday. The city will build the pickleball courts to replace the LB tennis courts at an estimated cost of $300,000. The college will pay to maintain the courts, which will be available for college and city programs, for “free play” by the public, and for tournaments organized by the Albany Pickleball Club.

Pickleball is a combination of tennis, ping-pong and badminton. It’s played with paddles and a plastic ball on a court about half the size of a tennis court. Albany has pickleball courts at Eleanor Hackleman Park.

According to Hodney’s memo, a new city pickleball complex has been planned for a while. Two locations were considered: LBCC and Timber Linn Park. Reece & Associates of Albany designed the courts, compared the two sites and concluded that building the courts at the college would be far less expensive and take less time than at the park. Part of the reason is that the college already has plenty of parking and none will have to be added.

Once the council gives its OK and the city and college sign an intergovernmental agreement, construction is expected to start in the fall of 2019.

The city parks and recreation fund has allocated $150,000 toward the project in the current budget year and another $150,000 in the next budget. Readers may wonder how the parks department can afford to spend that much money on pickleball when it faces cutbacks in its already meager maintenance program.  The pickleball money is from systems development charges or SDCs, which are collected on new construction and must be spent only on capital projects related to growth.

The condition of the LBCC tennis court says that for years there has been zero interest in the sport at the college. On the original four courts, the nets are gone from two. Only one of the four still has a complete net, and weeds sprout from cracks in the surface all over the courts. Pickleballers must hope that weed control and other maintenance will pick up when the new courts are built. (hh)

Postscript: The council voted 5-0 on May 20 to authorize the pickleball project at LBCC. Specifically, the vote was to authorize the city manager to sign a memorandum of undertanding with the college. 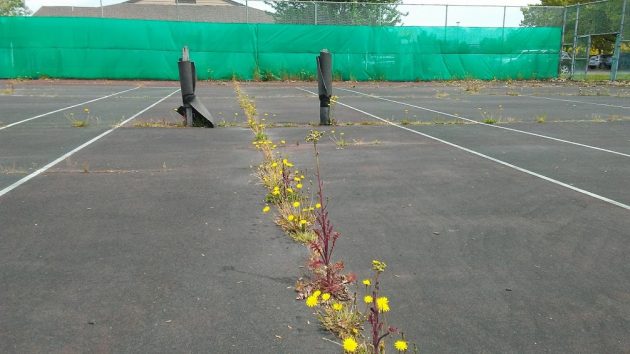 A line of weeds between two of the former tennis courts where the nets have been removed.


7 responses to “At LBCC, tennis goes and pickleball comes in”