As if water was plentiful and cheap 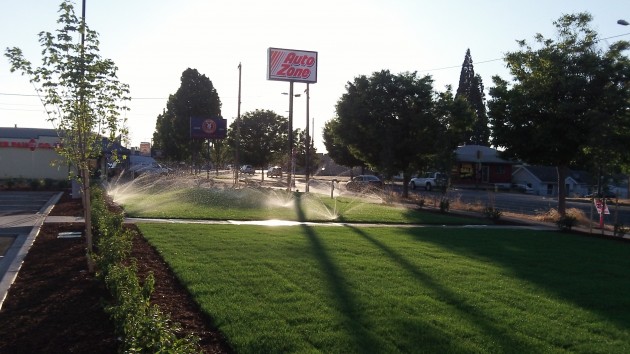 The Auto Zone frontage on Pacific Boulevard has a park-like appearance,

Drought or no drought, we keep adding lawns that need irrigation to look as lush as this one. Does that make any sense? So far the answer is both yes and no.

Until a few months ago, this property along Albany’s Pacific Boulevard was a barren wasteland, the site of a former Mexican restaurant demolished years ago. Now it’s home to a new business, and the property, besides being useful again, also looks a lot better.

But what about all that new grass? What about all those sprinklers sprinkling away on a Sunday night when we haven’t had any rain since early June and rivers are running lower than most of us have ever seen them?

As it turns out, there’s little choice. When a site like this is developed, landscaping is required by the Albany development code, which also says that irrigation must be provided to keep any vegetation alive. The code doesn’t actually require lawns as such, but chances are a rock garden would not  quite right in a place like this.

There’s also the money angle to keep in mind. The city’s water department runs on water revenue, and even though many homeowners prefer tan yards to pouring vast sums of money on the ground, a dry summer means water use goes up, and so does the income on which the system depends.

Chances are the drought won’t last through several more seasons. But if it does, if our Mediterranean climate does show signs of long-term change to a drier regime year round, we may want to change our landscaping and watering habits as well as the requirements in our codes. (hh)


5 responses to “As if water was plentiful and cheap”