Are single-family houses over? Not yet 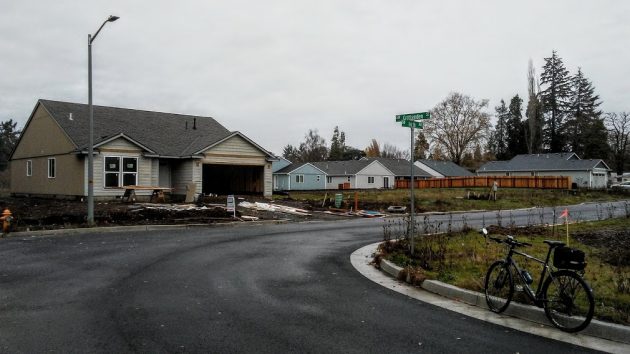 Another traditional single-family house under construction in southwest Albany.

There’s no sign in Albany that developers are waiting for the new state housing law to kick in, the law that seeks to encourage more people to live closer together and start using the bus instead of their car.

On Monday, the city council and Albany Planning Commission got a briefing on changes the city will have to make in its development code and comprehensive plan to comply with House Bill 2001, which the legislature passed in 2019.

The law says that cities of more than 25,000, such as Albany, must allow duplexes to be built on any lot zoned for a single-family dwelling. That includes lots in the historic districts. Cities must also allow bigger units up to quadriplexes and “village clusters” in any area intended for residential use.

The state is working on administrative rules to carry out that law, and Albany’s land-use regulations must comply by June 30, 2022. If they don’t, the state rules will apply.

The state rules will bar cities from adopting regulations causing “unreasonable cost or delay” in construction of so-called middle housing. As part of that, the city is barred from requiring more than one off-street parking place per dwelling unit.

All of this caused consternation among some council and planning commission members. Councilman Dick Olsen says the state seems to want to turn established neighborhoods into slums, and he thinks it’s a “really stupid idea.”

Jeff Blaine, whose jobs include director of community development, has been attending the committee drafting the state rules. He says the goal clearly is to have Oregonians use public transit instead of their cars.

While the effective date of the new rules is a year and a half away, you’d think developers would be looking ahead. So far, I see no sign of that. Construction of single family-dwellings continues apace on lots in subdivisions where, in 2022, the city will have to allow duplexes to be built.

We’ll see how it shakes out in a few years. But maybe the thing that drives new housing is not what the legislature wants but what developers think people will want to buy. (hh)


7 responses to “Are single-family houses over? Not yet”