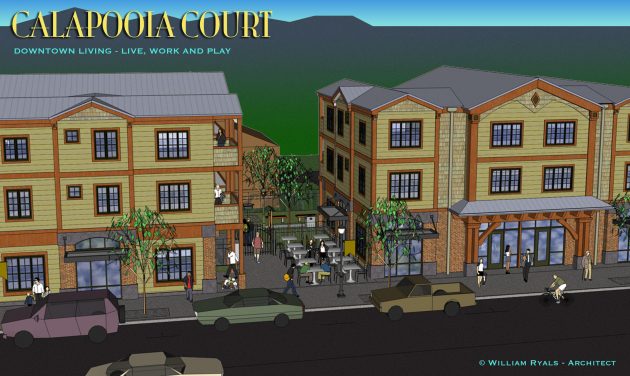 A drawing of the project the city council approved in June 2020.

Since 2018 Mark and Tina Siegner of Albany have tried to develop housing where three historic but dilapidated houses stood at the northeast corner of Calapooia Street and Fourth Avenue. Now the Oregon Land Use Board of Appeals has found procedural faults with the city council’s latest approval of their project and once again sent the case back.

The three-member board issued its decision on May 4. You can read the 32-page opinion here.

The council voted 5-1 that the project met development standards for compatibility with the Monteith Historic District. The decision overturned a denial by the Albany Landmarks Commission.

Friends of Historic Albany appealed to LUBA, as did Camron Settlemier, a longtime advocate for historic preservation.

The city did not defend the council’s action, leaving that up to the Siegners and their attorney.

LUBA denied several of the appellants’ claims but sustained others and “remanded” the case, presumably for the city to remedy its errors.

Among other things, LUBA faulted the city for not keeping the record open so that Settlemier could respond to new drawings of the buildings. It also said the city’s findings did not cover whether accessory buildings in the project met the development code. And it found the findings lacking in regard to sidewalks.

The appeals board rejected claims, among others,  regarding compliance with the comprehensive plan, the adequacy of building setbacks, and the materials proposed to be used.

The three old houses on the corner property were demolished in June 2019. The city’s landmarks board had opposed the demolition, but the council approved it twice. Its first approval was appealed, and LUBA struck it down.

What happens next? I’ll let you know when I find out. (hh)


10 responses to “Appeals board faults city on ‘Calapooia Court’”