Another look at those big oaks 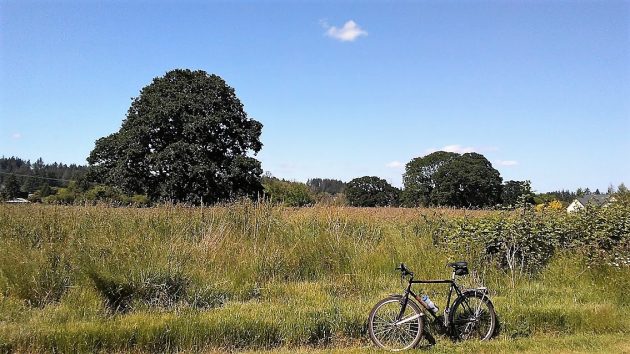 The Pheasant Run tree plan calls for the removal of that oak you see left of center in this May 28 view looking north from Dover Avenue N.W. Two of those in the right background will go too.

On a ride around North Albany the other day, I took another look at the site of the Pheasant Run subdivision the city council approved last month over the objections of neighbors who testified at a public hearing.

When the subdivision proposal was announced in February, I took photos that showed the trees in winter. No foliage. Now you see those oaks in their full splendor.

In the photo above, the tree left of center is designated as No. 51176 in the Pheasant Run “Tree Conservation and Setback Plan.” A table listing trees to be saved and trees to be removed shows this one, with a diameter of 42 inches at breast height, among those to be cut down.

One of the oaks in the grove in the background will be saved, according to the plan. It is listed as having a diameter of 63 inches at breast height. The subdivision plan shows it sitting in the middle of a tract — bigger than the surrounding home lots — that will not be developed. Two others in the vicinity (with diameters of 40 and 63 inches, respectively) are slated to come down.

Albany has a tree ordinance that says felling permits may be denied for various reasons including “scenic quality.” But the city staff agreed with the applicant that under state law to encourage construction of “needed housing,” the city standards were not sufficiently clear to require preservation of the stately trees.

The council approved the 147-lot subdivision, to be developed by Hayden Homes of Redmond, on May 9. The preliminary plat shows it to be developed in four phases, but it’s not clear (at least to me) in which order or when.

So far, on May 28, as you can see, the big oaks dotting this 47-acre site still soared above the field of waist-high ryegrass below. (hh)


12 responses to “Another look at those big oaks”