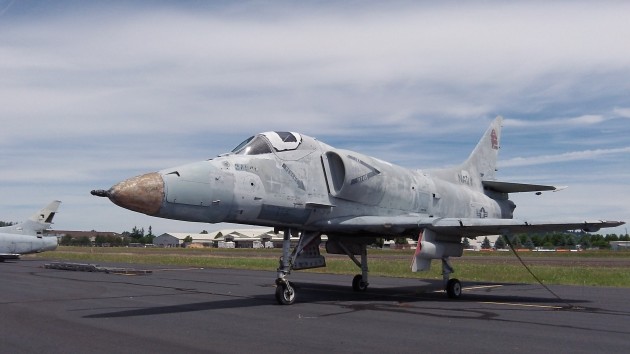 This old warplane was being restored for exhibit at the Albany airport in 2013.

On Monday the Albany city staff will asked the city council whether it should apply to participate in a University of Oregon program that helps cities study various things. Maybe there’s merit to the idea, but a couple of projects suggested for this cooperation sound like make-work projects to me.

One would have a UO team study the idea of relocating the Albany Municipal airport. The idea would be to free up the airport land for sale or commercial uses.

This idea was the subject of a big study maybe 15 or 20 years ago. Professional consultants looked into it and wrote a long report. If it has not been discarded or recycled, it’s still gathering dust on some shelf. If memory serves, this effort found no feasible way of Albany opening an airport somewhere else. I don’t remember the details, but one hurdle that comes immediately to mind is that an airport would have to be built on exclusive-farm-use land, and there’s no way that public necessity would justify this.

Another project that might be undertaken by the UO teams, according to city officials, is to study how vulnerable the city’s Willamette River highway bridges are to a big earthquake, and to suggest how they could be strengthened to survive such a disaster. ODOT regularly checks on the structural soundness of these and other bridges. If there’s a way to make them withstand a big quake, ODOT would have to pay for doing so. And in that respect, the Albany bridges would join a long list of critical structures for which the state is responsible. Nothing would be gained by a university study estimating how much it would cost to do just these two.

The city staff has suggested dozens and dozens of other questions or proposals on which university students and experts could write reports. The staff says the cost might run to $250,000. This sounds like a way to help support parts of the university that don’t involve running or catching balls and thus get no help from Nike. But as for doing anything for Albany, or telling the city anything it doesn’t know, it’s hard to see what that would be. (hh)

One response to “Another airport study? Aaarrgh!”