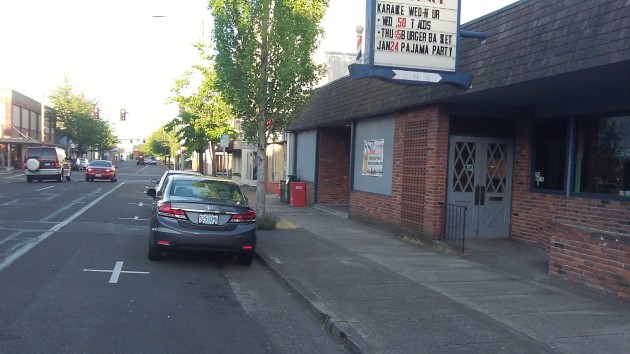 Diagonal rather than parallel parking spaces might be set up on this block of Second.

Angled parking may be coming to parts of downtown Albany sooner than expected. But it’s not a sure thing because ODOT may have something to say about it. The topic came up briefly Wednesday at a meeting of the Central Albany Revitalization Area advisory board. The board approved a no-interest loan of up to $175,000 to help Novak’s Hungarian Restaurant complete the renovation of the storefront at 208 Second Ave. S.W., where it plans to move from its current address off 14th Avenue S.E.

The Novaks originally announced their plans in November 2013, when they got CARA’s OK for a $126,000 loan toward what they then estimated would be a $627,000 project. Five months later, in April 2014, the project estimate had risen, and CARA increased the loan amount to $200,000 and made it “forgivable,” turning it into a grant.

Karen and Kaymarie Novak, daughters of the restaurant founders, and their architect Bill Ryals said Wednesday a series of miscommunications and setbacks had left them short. With CARA’s additional help, they hope to open the new restaurant by Aug. 1. (After the meeting I went by the place and peeked through the storefront window. Seven weeks until they open? The contractor will have to work miracles.) 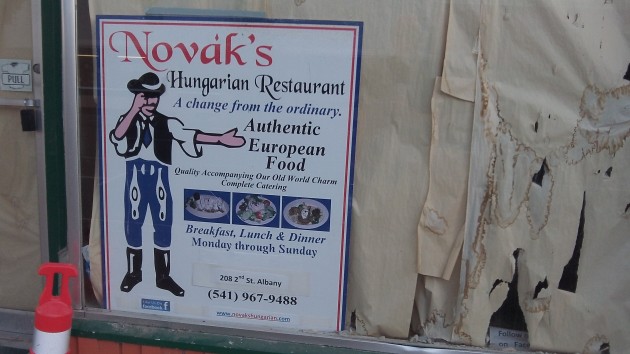 Hopeful sign in the papered-over window at 208 Second Ave. S.W.

In view of the popular restaurant moving there, without a parking lot of its own, the city’s Kate Porsche said she was thinking about angled parking replacing the parallel spaces on that side of Second for the one block between Broadalbin and Ellsworth. ODOT would be consulted, she said, and may have concerns about drivers making a right turn at the signal on Ellsworth.

Before acting on the unscheduled Novak matter, the CARA board approved, with Councilor Rich Kellum voting no, a $500,000 no-interest, 20-year loan to Rick Mikesell toward a $1.2 million reconstruction of the Century Building at First and Lyon. One of the drawings of the project showed angle parking in front on First. But Ryals, the architect for that project as well, said he just drew that in because he’s a fan of diagonal parking. Because they are easier to use, he thinks, angled spaces would help downtown businesses.

Angled parking on the north side of First also is being considered in front of the Albany Carousel once it expands.

The possible parking changes were, to me, the most potentially interesting items Wednesday. The only other item of interest was that CARA approved a change in the aid partnership it has with Scott and Spencer Lepman, who plan to renovate the historic Fortmiller funeral parlor on Third Avenue S.W. and build townhouses next door. Zoning problems prevent them from building the townhomes, and CARA agreed to their plan to build six townhomes or eight apartments on a lot on Third Avenue S.E. instead. Also, the board agreed to fund with CARA money the hiring of a consultant to review downtown zoning language so that the city can remove obstacles of the kind that foiled the original Lepman plan.

Except for the Novak deal, which was unscheduled, details on these items are too tedious to regurgitate here. They can be found in the June 9 agenda packet for CARA on the city’s website. Have fun. (hh)