And then, there are the birds outside 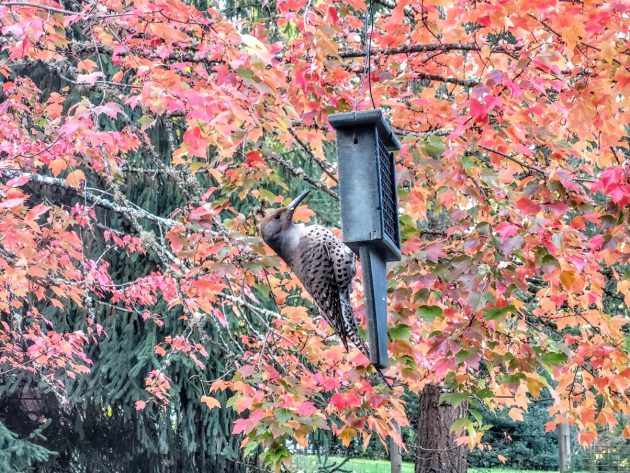 This northern flicker came by on Nov. 9. Flickers and other woodpeckers are frequent diners outside my window.

What’s my excuse for running a photo of a bird? I don’t have one. But on the eve of Thanksgiving, I figured I’d chance it.

As someone who spent most of the first 20 years of my life in big cities, from Berlin to Los Angeles, I am particularly grateful now — more than half a century later —  to be living on the outskirts of a small one, where there’s enough space and trees and greenery of all kinds for wildlife to be part of the scene.

Watching deer make their daily treks through the yard and trimming the ivy is part of the attraction of sitting at my computer and looking out the window.

And then there are the birds that frequent the suet feeder close by and the seed feeders farther away. There’s no end of cheap entertainment to be had this way, if you’re not too particular and don’t mind repetition.

I’ve also discovered, latecomer to technology that I am, that I can keep open the page I’m writing this on while at the same time listening, via YouTube, to Eric Clapton’s tribute to J.J. Cale in the background. Now there’s a treat on a quiet Thanksgiving eve.

Speaking of technology: There is lots that is regrettable about the effect of the digital upheaval on our lives. It has, for instance, pretty much killed local newspapers as a force. But it has also enabled dinosaurs like me to keep their hand in by reporting, even if sometimes it’s about the very small things in life.

Like, on slow days before national holidays, birds outside one’s window. (hh)


15 responses to “And then, there are the birds outside”