And another upgrade at Burkhart Park 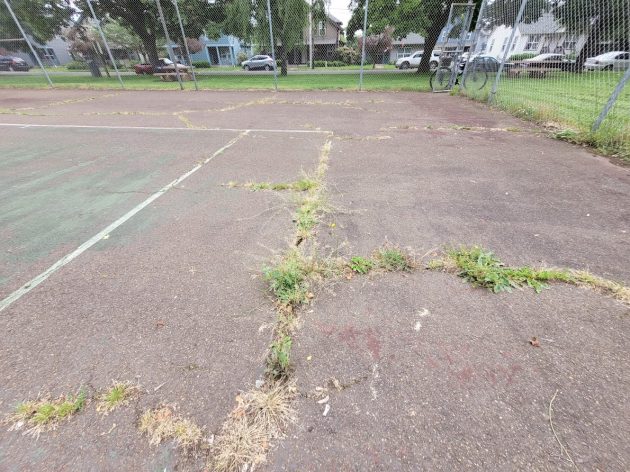 The tennis court at Burkhart Park on June 13. In the background, Sixth Avenue.

The addition of a “fitness court” is not the only improvement the Albany Parks and Recreation Department has in store for Burkhart Park.

I reported on the planned purchase of the fitness court, a kind of outdoor gym, a couple of days ago, but I was unsure whether it would be built on the hard surface of the tennis court or somewhere else in the park.

“We are putting a concrete pad for the fitness equipment just to the south of the current courts,” he said in an email. “We are also resurfacing and doing some work on the tennis court — around $10,000 worth with regular maintenance funds.”

Burkhart Park measures just under 2 acres and lies between Fifth and Sixth avenues west of Burkhart Street. It’s across Sixth Avenue from ParkRose, a development of 13 units owned by the Albany Partnership for Housing and Community Development, a nonprofit that has developed and maintained affordable housing units since it was started in 1991.

The tennis court also serves as a basketball court, with hoops at each end. Lately it has looked kind of neglected, with weeds growing in the cracks.

And yes, the planned work on the tennis court includes putting the net back up. Barnett said vandals had damaged one of the posts, so the net had to be taken down.

The Burkhart Park tennis court will be redone as soon as the city can get a contractor to do that  job along with the court at Henderson Park. Apparently tennis court contractors are overbooked after the wet spring. (hh)


4 responses to “And another upgrade at Burkhart Park”