And, after the ice, back on the bike… 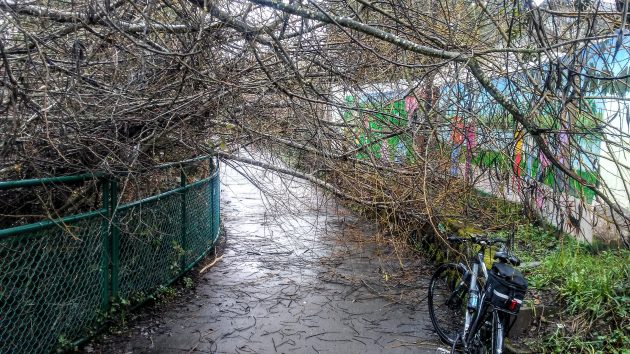 The blind corner in the dip of the Dave Clark Path had a storm-caused hazard on Sunday afternoon.

The day after our Saturday midnight ice storm, I’m riding the bike through a cold Albany drizzle while waiting for the power to come back on at home. And I’m thinking about what if any conclusions can be drawn.

For one thing, natural gas has kept people from freezing during the night. Let our policy makers remember that when they want to do away with fossil fuels in the next few years.

When the power goes out, it’s a great thing to be able to take a hot shower because you have a gas water heater. It’s even better to be able to heat part of the house with a fireplace burning natural gas, even when its electric fan doesn’t work.

So, the next time you hear about making natural gas more expensive and harder to get because of global warming, remember the February ice storm of 2021.

Pacific Power & Light used to be conservative in telling you when your power was estimated to be restored. Not this time.

The power went out about 1 a.m. Saturday. The first email notice from PP&L estimated it would be restored by 1 a.m. Sunday. The next estimate was 11 p.m. instead. (Then, after I wrote this, they actually beat that estimate by several hours.)

Looks like the line crews faced far more work or complications than at first it appeared. They have everybody’s thanks for what they do.

Late in the afternoon on Saturday, a Wright Tree Service crew was working to cut down the long remaining limb of a red oak overhanging the street, more than 100 feet up, in the 600 block of  Ninth Avenue.

The other arm of this fork had crashed during the storm, taking down power lines and the back end of a  Toyota Prius parked on the street. Another contractor stood by to restore the power lines when the tree guys were through.

All summer long, contractors for the electric utilities go around cutting the limbs of trees above power lines. Judging by all the outages caused by trees or branches falling down after midnight Saturday, that trimming program ought to be stepped up.

And finally, this Sunday afternoon, in some parts of town the whine of chainsaws alternated with the clatter of generators. Some people are pretty well prepared for the kind of rotten weather we just had. (hh) 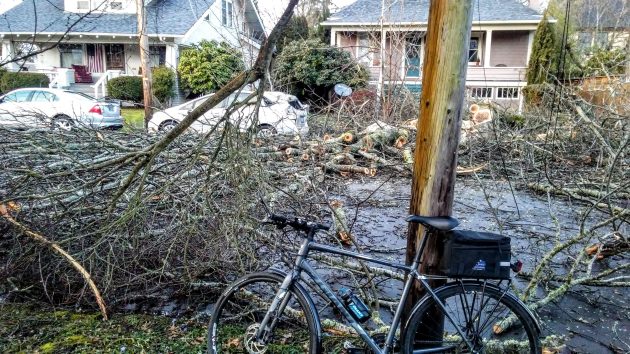 Part of of a big red oak came down on Ninth: The aftermath on Saturday afternoon.