An Oregon story: A man and his mountain 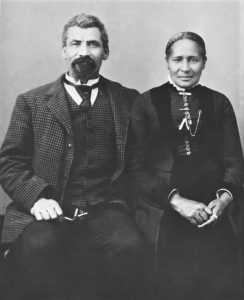 This is a story about Ben Johnson, who died in Albany in 1901. I regret that I had never heard of him until last month. He must have been a remarkable man because a mountain bears his name.

Since 1964, the 4,500-foot peak in the Siskiyous near Ruch in Jackson County has been known as Negro Ben Mountain. Before, it was something else, but in ’64 they cleaned up the race reference. Soon it will be called Ben Johnson Mountain instead.

On Saturday, the Oregon Geographic Names Board considered a request to change the name by dropping the racial element and giving the man proper credit by adding his last name.

Bruce Fisher, the board president, told me Tuesday the panel had voted unanimously to forward the proposed name change to the U.S. Board on Geographic Names “for their consideration.”

You can read the entire background in the board’s agenda packet here. You will learn that Benjamin Johnson, who was born enslaved, became a blacksmith and ran a shop near Uniontown, a settlement near the Applegate River of Southern Oregon, in the 1860s. He left there and turned up in Albany, where on New Year’s Eve of 1870 he married Amanda Gardiner Johnson.

He continued working as a blacksmith. We know this because on Dec. 26, 1884, the Albany Democrat listed the damage done by a huge snowfall the week before. The lead item: “The blacksmith shop of Frank Wood, occupied by Ben Johnson, suddenly collapsed, the roof falling in a very flat manner on bellows, forge, etc., in the shop below.”

The detective work tracing Johnson from his mountain blacksmith shop near Uniontown to Albany was done by Jan Wright. She’s the president of the Talent Historical Society in Jackson County. Bob Zybach of Cottage Grove, who knows her, says she lost her home in the Almeda Fire that swept through Talent and Phoenix after Labor Day.

It was Zybach, a former Albany resident, who called my attention to this whole thing in September. He wondered what I knew about 807 Calapooia Street, the address given on the death certificate for Johnson’s widow, Amanda, when she died in 1927.

Turns out the address no longer exists, if it ever did. Maybe it was a mistake on the death certificate.

At the Albany Regional Museum Tuesday I was able to find, in Polk’s Directory for 1913, “Amanda Johnson (wid. Benj.)” residing at 938 W. 7th. That address no longer exists, either. But it would have been at the southeast corner of Seventh Avenue and Elm, where the three-story Elm Street Medical Center was built in 2003.

The “SE corner Seventh and Elm” is where the 1878 Albany City Directory (also on file at the museum) puts the residence of “Johnson, Ben, blacksmith.” And that’s where, according to a “Blacks in Oregon” story about Amanda and Ben Johnson in the state archives, they lived the rest of their lives.

What about Frank Wood’s blacksmith shop where the heavy snow before Christmas 1884 made the roof cave in? The 1878 City Directory says it was at No. 7 West Second, another address of which there is no trace.

Except for riding around on the bike looking up addresses, I’ve done no work on Ben Johnson’s story in Albany. May this be a challenge to local history detectives: Amanda and Ben were two black Albany citizens and longtime residents about whose lives we’d like to know more. (hh) 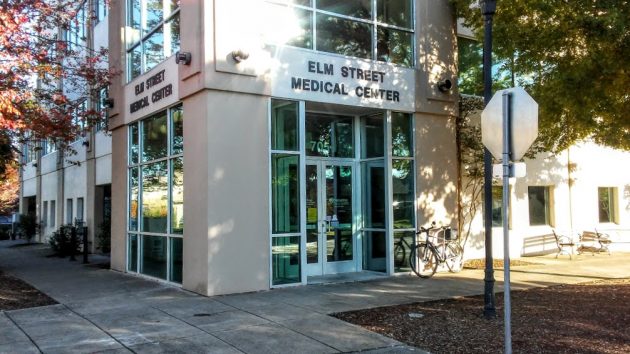 Imagine this corner in the late 1800s, when Ben and Amanda Johnson lived there.

14 responses to “An Oregon story: A man and his mountain”