An empty school, sad to see 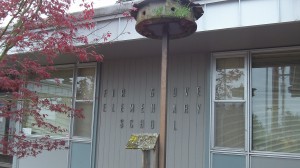 Even the bird house outside Fir Grove looks abandoned.

In a world full of sadness, an empty schoolhouse may not be the saddest thing you ever see, but it’s still pretty sad.

This lament is prompted by the sight of Fir Grove Elementary School in North Albany, vacant since 2011, when the school board was forced to close it as part of a range of austerity measures. The board said then that the closure would be temporary. But there is no date or year when the closure is set to end.

A group trying to open a public charter school within the Albany district had considered using Fir Gove as its site. But the school board has just rejected the group’s application — again — confirming the impression that the board just will not allow a charter school to be formed, period. (According to the account in the local paper, one of the factors cited by the board was that Fir Grove might again be needed. But when, the board didn’t say.)

In 2011, the primary grades that used to be housed there were shifted to Oak Grove, a few miles away. Now Oak Grove is crowded, and the board is reported to be thinking of adding a “portable” classroom there, presumably at some expense.

Fir Grove was closed to save money. But the grounds are being kept up, and at least one light is on inside, so some costs continue. If the crowding at Oak Grove leads to reopening Fir Grove sooner rather than later, that would be the best solution all around. (hh)