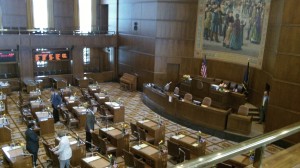 SB 1546 will go to the Senate floor, but it doesn’t go far enough to protect store clerks from state-sponsored stings.

It is the custom of the Oregon Liquor Control Commission to test checkout clerks at supermarkets and convenience stores by sending minors to buy beer, and then to nail the hapless employees if they fail to prevent the sale. This underhanded practice is wrong, and it should be stopped.
The state Senate Judiciary Committee heard from two former retail clerks on Wednesday. Both had been longtime employees and were fired after accidentally failing to prevent sales and being charged with a Class A misdemeanor, a crime.

One said it had been a busy night at the store. “As I rang up a customer at approximately 8:20 p.m., I glanced up, recognized a neighbor from up the street and checked out his package of diapers and a six-pack of beer. … The next person in line showed me her badge and identified herself as an OLCC agent. She said I had just failed an alcohol sting by selling alcohol to a minor.”

The clerk had thought the customer “looked old enough to purchase alcohol based on my thought that he was a familiar neighbor that I had carded and sold alcohol to in the past.” But she had been mistaken.

She was interviewed and cited at her check stand while customers were waiting in line. “An hour and twenty minutes after my arrest I was asked to shut down my check stand and leave the store. My career at Safeway was over.”

The statement by another witness said: “They sent a minor through my line, with alcohol. I asked her for her ID, and then typed in what I thought it said the birthdate was. I thought it said she was old enough, so sold her the alcohol. A police officer and OLCC representative came into my line and asked me to close it down. He told me I sold alcohol to a minor. I told him he must have been wrong, because I always ID everyone who looks under 30 years old. He showed me her ID, and I told him the birth date still looked the same to me. What happened is that I misread it, because I needed glasses and didn’t know it. I transposed two numbers.”

The clerk went to have her vision checked and got a prescription for glasses, but it was too late. She had been charged with a crime, and “I was let go from Safeway on August 9, 2011, after 5 days. I lost my health insurance, and my dental coverage. I had worked for Safeway for almost 15 years, and had a perfect record of proper ID’ing for alcohol/tobacco sales all of that time.”

The senate committee advanced SB 1546, which would among other things reduce the offense of mistakenly selling alcohol to a minor from a misdemeanor to a violation. That presumably won’t keep employees from being fired, but it might make it easier for fired employees to find another job.

The legislature should do more. It should put a stop to these repeated OLCC stings. In all of these operations, there would be no violation at all unless the state had induced a minor to create the possibility of one. It is unfortunate and wrong for the courts to have allowed this kind of trickery. It amounts to creating the conditions for a crime and to see if anyone falls into the trap.

There are other ways of enforcing the law against minors buying liquor. Kids found with beer could be asked there they got it. Frequent sellers of beer to minors could be watched. Young people emerging from stores with six-packs could be stopped and challenged. It would be more difficult, sure. But it would not put the state in the position of contributing to crimes, and it would not cause grocery clerks to lose their jobs for inadvertent lapses and innocent mistakes. (hh)