The words “Welcome to the Albany historic districts” will face Salem Avenue.

Looks like Albany’s newest roundabout will welcome drivers to the city’s historic districts, at a cost so far estimated at between $70,000 and $90,000 including landscaping.

The traffic circle was completed in September on Main Street at Salem and Third avenues, but the space in the center remains unfinished. Last month, the advisory board of the Central Albany Revitalization Area (CARA) voted for the idea of some kind of welcome sign instead of public art, which was another option. Plain landscaping was an option as well, and that would cost around $20,000 or less.

On Wednesday, the CARA board got a look at the city staff’s preliminary design of the welcome sign, along with the cost estimate. The board did not question the amount. Instead, it voted unanimously to go ahead. Upgrading Main Street, near the eastern edge of its district, is one of the line items in the 2001 urban renewal plan that CARA exists to carry out.

The design features a low wall topped by metal rods, mainly to prevent skateboarding. There was a question of whether the wall would afford homeless people a place to camp  behind. But evidently that concern will be addressed (though it wasn’t clear, at least to me, how people could get in there or, if they did, how they would be kept out).

Another project that may get CARA support: Better lighting along portions of the Dave Clark Path along the Willamette River. Board members heard a presentation by Sandy Roberts, a community policing specialist with the Albany Police Department, on reducing crime with environmental design, and suitable lighting is part of that approach. There’s no firm estimate of how much lighting along the path would cost, though the figure of $200,000 was thrown about.

The board talked about this for some time and members asked for a detailed plan of where along the path lights should be placed, and what kind they should be. Some of the park lights the city installed in the past don’t meet the standards of “Crime Prevention Through Environmental Design” or CPTED, Roberts told the board, and newer parts of the trail are completely unlit.

Areas along the path have become hangouts for vagrants, and the city has taken steps to improve visibility to discourage them. Still, Roberts said the problem persists. Any decision on lighting along the path won’t come before Dec. 17, the board’s next meeting, if then, because members agreed to skip meeting in November. (hh) 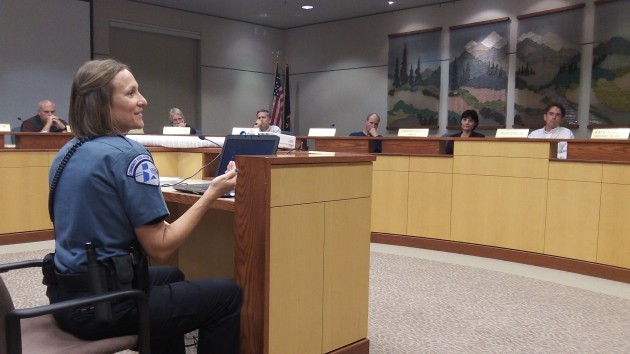 Sandy Roberts of the Albany police talks to the CARA board about crime prevention through lighting and other design elements.