Albany’s approach to the homeless: ‘Solutions’ 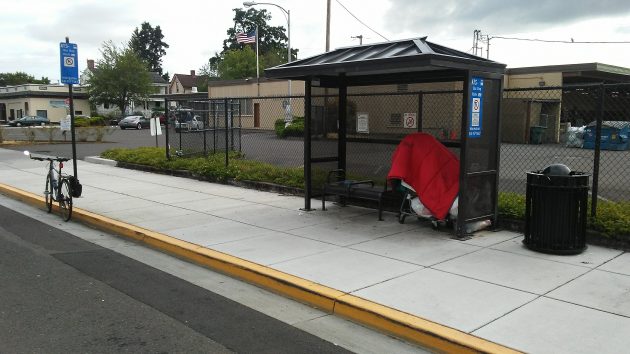 Somebody’s belongings in the bus shelter at the Albany Post Office on July 15.

Since April, Albany has been taking a new approach when police are called to respond to a problem with someone living on the street. You might call it the “shoe leather” system that gets people a path to being helped immediately and on the spot — “curbside” if you will.

Casey Dorland, the administrative lieutenant of the Albany Police, used those words when he and Public Information Officer Marilyn Smith described the program to the city council Wednesday.

It works this way: Police get called to deal with an apparently homeless person causing or being in some kind of trouble. If the person agrees, the responding officer will call someone at CHANCE, a regional organization based in Albany that helps people in crisis. The officer waits on the scene until CHANCE gets there to make a curbside assessment of what kind of help the person needs — whether it’s related to mental illness, addiction, or whatever — and then follows through.

No more telling troubled people on the street they can make an appointment at such and such an office and hoping they’ll remember to show up.

The system is voluntary. But since April, some 33 persons have been referred in this way and got various kinds of help, from emergency housing to treatment support.

Nobody knows how many homeless people live rough in Albany — in the parks, under bridges or in improvised camps along brush-covered riverbanks. But an attempt at a headcount earlier this year came up with 158, the council was told.

Albany has a long history of cleaning up the trash left at vagrant camps, and trying to get homeless people into housing. But the camps kept coming back. This spring, Dorland and Smith organized what they now call the City Solutions Team, and the Dorland’s “shoe leather” approach is the result.

There’s a long list of organizations and agencies taking part, including the Linn County Sheriff’s Office, other county agencies, the Albany fire and parks departments, and Albany General Hospital. But CHANCE, now headquartered downtown in what used to be the Pizza King restaurant, is the key. Dorland called it the “navigator” that makes the approach work. (You can read about CHANCE at its website, which has testimonials from people who lived on the street and have turned their lives around.)

From City Manager Peter Troedsson, Dorland and Smith got letters of commendation for their work on the Solutions Team. Homeless men and women who beat their addiction or other problems and get back to a better life will have reason to thank them too. (hh)


18 responses to “Albany’s approach to the homeless: ‘Solutions’”