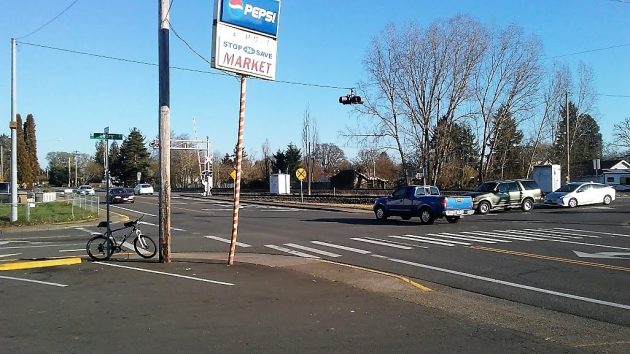 Geary Street and Salem Avenue shortly after 3 p.m. on Jan. 30. The intersection was tied for the most collisions last year.

The latest annual report of the Albany Police Department might cause drivers to avoid certain intersections because of their crash history. But of course they’re on the main thoroughfares, so avoiding them would be hard.

Except for an uptick from 2015 to ’17, traffic collisions per 1,000 residents have been on a downward trend in Albany for the last 20 years. Last year colllisions reported to the police numbered 9.33 per 1,000 residents. (Considering the population of 50,200 or so, that ratio would suggest about 485 crashes for the year.)

Most of those caused only property damage, if that. As for injury crashes, the Albany ratio has been below 2 per 1,000 residents for the last two years. Thankfully, the ratio of fatal crashes was lower still, less than 0.1 per 1,000 residents. There were two fatal collisions in 2018.

Now to the intersections. The top five locations for traffic crashes in 2018:

Geary Street and 14th Avenue, and Geary and Salem Avenue, were tied for the lead with 12 collisions each.

The next three intersection all saw 11 crashes each during the year. They were Geary and Pacific Boulevard, Santiam Boulevard and Waverly Drive, and Santiam and Clay Street.

Of the five leaders in the Albany collision derby, the corner of Geary and Salem stands out because it’s the only one without traffic signals. Why? Presumably because it doesn’t justify signals because of traffic volume and other reasons. One complicating factor is that it’s very near two railroad crossings over multiple tracks.

As for those five intersections, we may not be able to avoid them because they are the key to getting around town. But let the crash reports be a reminder, when going through there, to be especially aware. (hh)

One response to “Albany traffic crashes: The top spots”