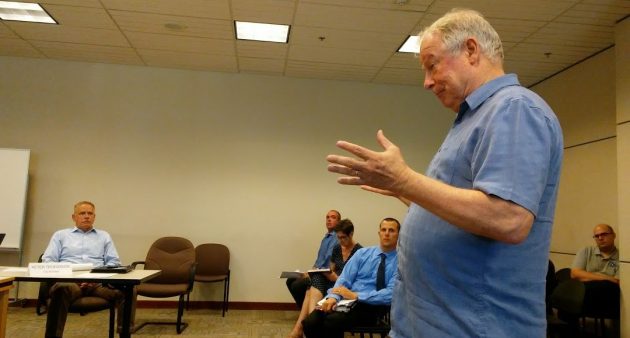 Wes Hare talks about taxi regulation while Peter Troedsson, left, his successor as city manager, and others listen.

Unless council members change their mind, Albany is going to drop its already minimal regulation of taxi cabs. And as for ride-share companies like Uber and Lyft,  the council showed no enthusiasm for trying to hamper them with local rules.

All this was discussed at a council work session Monday afternoon, the last for City Manager Wes Hare, who’s retiring, and the first for his successor, Peter Troedsson.

Unlike other towns, Albany regulates taxi operators only to the extent that it requires extra liability insurance to get a city cab license. Hare said he knew of no insurance claims in which the city requirement played a role.

Over the years the council has occasionally talked about regulating cabs — requiring vehicle safety inspections or subjecting drivers to criminal background checks, for instance — but always decided against it. One big reason: The more it regulates cabs and drivers, the greater risk of liability the city would have if something went south.

As a parting gift, Hare presented the council with a memo suggesting two alternatives, especially in view of the possible arrival in town of ride share systems like Uber: Work out a regional agreement by which licensing would be handled by the Cascades West Council of Governments, which already licenses Medcaid transport operators, or drop taxi regulation altogether.

The council’s consensus was to repeal the city’s taxi ordinance and, in the words of Councilman Mike Sykes, “walk away.” (hh)