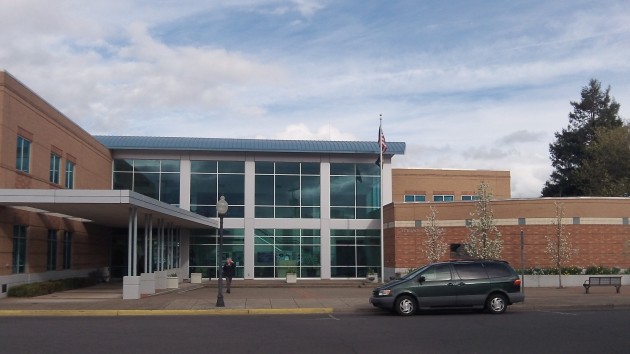 Albany City Hall, where council action on dispensaries is pending.

The Albany City Council is wasting no time in its drive to ban, at least for a year, any medical marijuana stores within the city limits that might be authorized by the state. An ordinance imposing a one-year moratorium on dispensaries — through May 1, 2015 — is on the agendas of the council’s work session Monday afternoon and the regular meeting Wednesday night.

Also on the schedule: an ordinance to impose added restrictions on dispensaries if and when they are allowed in the city. The measure proposes that dispensaries pay a fee, in an amount yet to be determined, to compensate the city for any added enforcement expense. It also proposes to require some kind of distance between dispensaries and one or more other zones. What zones? That’s left blank so far, as is the distance, for the council to fill in when it acts on the measure.

Under state law, medical marijuana dispensaries are allowed only in commercial, industrial, mixed-use and agricultural zones. The council has talked about requiring some distance between a dispensary and a residential zone. State law already says dispensaries can’t be within 1,000 feet of any school or another dispensary.

Oregon’s medical marijuana program on Friday approved its first eight dispensaries. Seven of the eight waived confidentiality, so the state was able to announce their names and locations. Three are in Portland; the others are in Hermiston, Salem, Bend and Eugene.

Four Albany council members, the minimum required for any action, have voted before to ban dispensaries in town. Unless they change their mind, it’s pretty sure that the proposed one-year ban and the additional restrictions will be enacted. The ban will take effect as soon as the mayor signs it. Under state law, it has to be enacted before May 1 in order to take effect. (hh)

4 responses to “Albany to act on marijuana store ban”