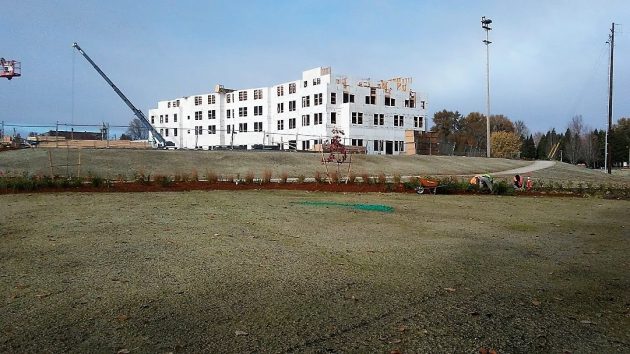 In Independence, The Independence Hotel is under construction on a site overlooking a vast expanse of  riverside parkland.

After years of talking about it, Albany is trying to follow its neighbors on the Willamette River by stimulating redevelopment of its riverfront. The first step — you guessed it — is finding a consultant.

City Manager Peter Troedsson told the council in his weekly summary of city actions that the staff is preparing a request for consultants “capable of combining the conceptual planning work for riverfront development and the established and partially used engineering work for Water Avenue streetscape.”

When it met on Oct. 17, the advisory board of the Central Albany Revitalization Area talked about going ahead with some general push for redoing the riverfront. Seth Sherry, economic development director, said this would take a good deal of work to prepare buildable plans for public parks, street improvements, and private investment, along with delicate coordination with private developers. He thought something might be ready for construction in 2020.

CARA has about $20 million left to spend before expiring, and Sherry guessed that the waterfront effort — with as many as 10 possible projects identified in the CARA work plan from 2001 — would take $15 million of that. He recommended that CARA stop various small-grant programs to conserve its finances for the riverfront task.

Upstream of Albany, Corvallis revived its riverfront years ago, mainly with a linear park. Downriver, Independence is doing so now with construction of a 75-room hotel overlooking a large landscaped area and wide-open park offering scenic views of the Willamette.

In Independence, “The Independence Hotel” promises to open next summer. It’s intended for visitors to various events at nearby Western Oregon University and elsewhere, including wineries. It will also cater to bicycle tourists with a fully equipped bike repair room.

Next door to the hotel, a sign announces Osprey Point, planned as a three-story complex of “luxury apartments” and retail spaces topped by a “rooftop greenspace.”

Geography and the railroad track along Water Avenue make Albany’s riverfront hard to redevelop in a way similar to Independence. For one thing, as a couple of CARA board members observed last month, the thickly wooded bank makes the river itself kind of hard to see. (hh) 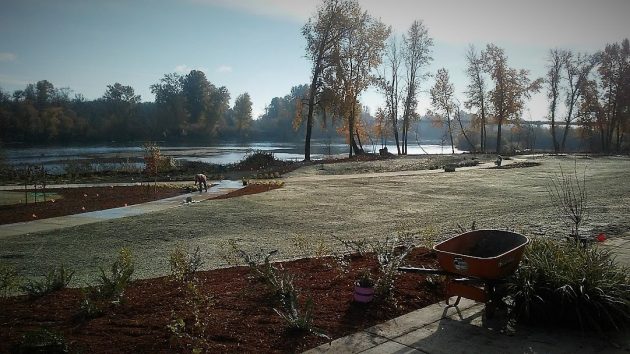 The grounds near The Independence Hotel offer a long view of the Willamette.