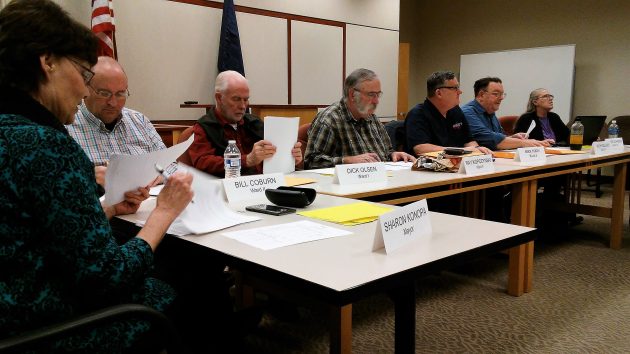 The city council studied the proposed towing law at a work session Monday (seen here) and adopted it Wednesday night.

Those nighttime raids by out-of-town towing operators looking to grab up cars improperly parked on private Albany lots should now be at an end. The city council Wednesday passed a ban on predatory towing from private property, and the law takes immediate effect.

The council acted on an ordinance prompted mostly by the experience of an apartment dweller who had forgotten to display her disabled-parking card, found her car missing in the morning and had to pay about $500 to get it back from the Salem company contracted by her apartment complex to patrol the place. Mayor Sharon Konopa told the council about this in December and suggested something be done.

The ordinance has several other regulations and restrictions. Among other things, property owners must give signed authorization at the time a tow takes place, and the tower must document the operation with a time-stamped, digital photograph.

There was some back and forth between the council and a couple of local towers, not implicated in any predatory practices, that resulted in changes in the draft law. For one thing, the council agreed to drop a requirement that towers accept credit cards. The tow company men said credit cards doesn’t work because vehicle owners, mad that their rigs were towed, often make it hard or impossible to collect.

The council passed a resolution setting maximum charges for impounding vehicles from private property. The top hookup fee was capped at $350 (instead of $300 as in the original draft), plus various mileage and storage fees.

Despite the new law, getting towed is still expensive and a pain. So it’s never a good idea to leave your car in a spot where the signs say you’re not supposed to park. (hh)