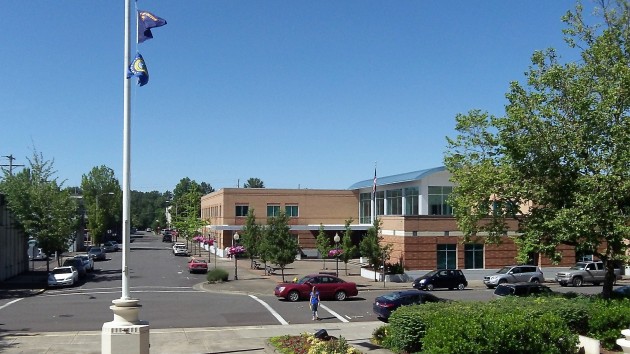 A rain tax, the council’s topic inside City Hall, looked hopelessly out of place under Monday’s clear sky and sunshine. But we know that seasons change.

Now we have a better idea how much Albany’s coming  rain tax — the official tag is storm water utility fee — will cost each and every household, depending on what the city council later decides. While no decisions have been made, the council spent two hours Monday being briefed on the potential details.

If the council opts for a modest revenue and expense goal for the proposed new storm water utility of $1.75 million a year, a single-family residential customer would be charged a monthly fee of $6.74. Corresponding rate reductions for sewer and water of $4.13 (for a customer using the average of six units of water a month) would bring the storm water utility fee to $2.61 a month.

If, on the other hand, the council adopts a bigger storm water utility program with a revenue goal of $3.45 million in five years, the monthly bill for a single-family residence would be $13.29. The rate reductions (6 percent for sewer and 2 percent for water) would total $4.13, bringing the rain tax total to $9.16 a month.

According to the present plan, the new fees are to be adopted this fall and take effect in March 2017. Revenue targets and fees are based about two-thirds on the needs of the long-neglected storm water system and one-third on the cost of complying with a pending new state storm water discharge permit expected to take effect in September 2016. City administrators have been urging the state Department of Environmental Quality to back off some of the more burdensome provisions of the proposed permit. If that effort fails, they say, the rain tax would have to be higher.

For example, the proposed rate structure was based on inspections and maintenance of 10 percent of the storm water system annually. According to city staff, a draft of the new permit requires that the city inspect and maintain 25 percent of the system per year, which the staff said may require hiring eight or so people. Also, the city now requires special storm water provisions only in construction projects of an acre or more. The proposed permit would require water retention facilities big enough to catch one inch of rain if construction disturbs 5,000 square feet. This would make it impossible or prohibitively expensive to build a house on a small lot.

Rich Kellum, Floyd Collins and other council members again vowed to fight any permit conditions that go beyond federal regulations. Staff members said they, too, had been kicking around ways of challenging excessive conditions. One way is to reject regulations going beyond federal requirements on the grounds they are unfunded mandates, which the state constitution bans.

All this will come to a head this fall, and the council agreed with staff suggestions on various ways of informing the public of the issue and the money involved. In the meantime, a more immediate worry might be whether we’re going to get enough rain this June to save the lawn from premature death. (hh)