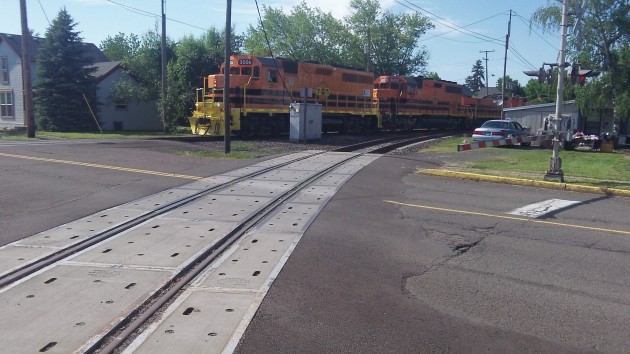 As you can see, these locomotives are not turning left just yet.

Whether it’s a right turn or a left turn depends on which direction the trains are going. But it will be a few more weeks before they use a new Albany track to turn either right or left. That’s the word from Kevin R. Haugh, the general manager of the Portland & Western Railroad.

Under an agreement signed in June 2009, the state gave the railroad a grant of $6,990,516 under the Connect Oregon II program for constructing a short section of new track between Madison and Main Streets, known as the Santiam Lead, and for related work on the Y-shaped track known as the Albany Wye. 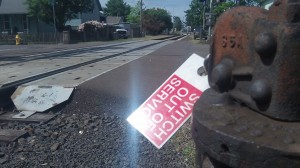 Switch for the left turn remains out of service.

The track construction was delayed for a long time, but it was finished this spring, and I’ve been asking the railroad and ODOT-Rail when the new installation would start being used. The railroad’s general manager, based in Salem, responded by email this week:

“What we would actually consider to be a ‘Right Hand Turn,’ the project that is the Santiam Lead out of the Albany OE Yard and turning right onto the Toledo Branch, or the reconstruction of the Albany Wye. The track construction is complete and the CTC portion is ready to be turned on. Currently we are working on a General Order to identify the Control Point and means of traversing through the OS. We are hoping to get this running in the next few weeks.” (He was referrring to “central traffic control” and, apparently, the section of new track between signals.)

Why this preoccpation with what may appear to be an obscure railroad project? Because it’s been so long in the works, has cost quite a bit of money, will help the railroad in its operations, and is supposed to be a solution for a problem — frequent blockages of the heavily-traveled Queen Avenue thoroughfare — that Albany motorists have been complaining about for close to 50 years. (hh)