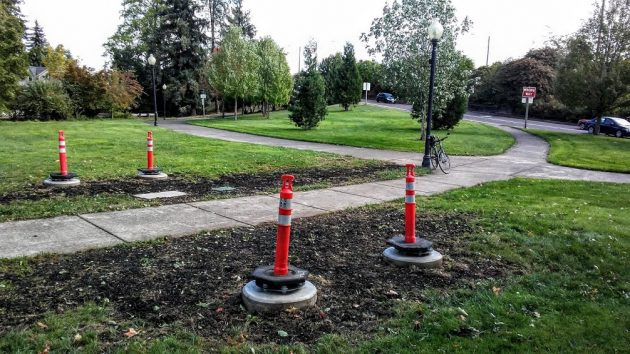 The site of Albany’s public art project off the 99E off-ramp at Lyon: The foundations are set.

Albany may get its long-awaited public art project, a set of steel sculptures intended to look like flowers, just before Christmas time.

In his Friday report to the city council, City Manager Peter Troedsson mentioned that the foundations and electrical work were being installed at the chosen spot. That’s on both sides of a walkway on state-owned right-of-way near the Lyon Street off-ramp of Pacific Boulevard (Highway 99E).

On Saturday I went there to take a look. There are four foundations. That’s because the original concept of 10 steel flowers has been reduced to four.

Under the provisions of a 1998 city ordinance, the city was obligated to spend some money for public art in connection with the construction in 2017 of the new police headquarters and main fire station. There were expenses loosely related to “art” at both sites, and in January 2018 the council authorized $80,000 to be spent on a separate project.

The Albany Arts Commission then held a competition and picked a concept by South Carolina sculptor Deedee Morrison. Her original idea called for 10 12-foot-high steel items meant to resemble Oregon wildflowers equipped with solar-powered LED lights that would glow in changing colors. Now there will be four of these, not 10.

I emailed the sculptor for more details of the changed design but so far haven’t heard back.

The Arts Commission discussed the project when it met on Sept. 8. Parks and Recreation Director Kim Lyddane told the group they had been shooting for installation by mid-November. “But we will be in, hopefully, by Dec. 1.”

So with luck, downtown will have one new and additional decoration by the time Christmas rolls around. (hh)