Albany protest, why school buses were there 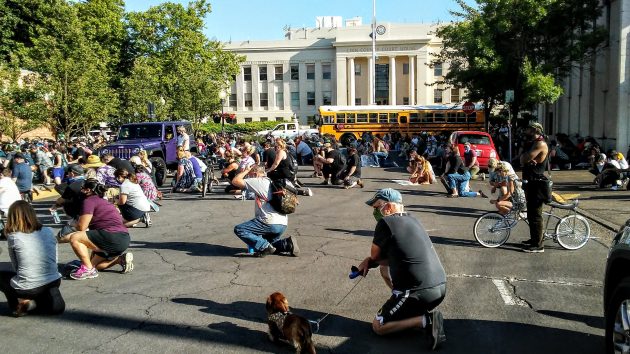 In the background, one of two Albany school buses at the Tuesday demonstration downtown.

What were school buses doing at the downtown Albany demonstration for racial justice on Tuesday? I got that question from one reader, and on Thursday I asked the school district. The answer came right away.

When I saw two Albany school buses on Tuesday afternoon, at the north and south ends Broadalbin Street in front of City Hall, the demonstration was winding down with the crowd kneeling for nine minutes. And I assumed the buses might be there to pick up Albany students who were attending the event. That turned out to be wrong, completely off base.

The buses — yes, two of them, as I had seen — had been requested by the Albany Police Department to use to block traffic, Andrew Tomsky told me Thursday afternoon. His title is communications/media administrator, and he acts as a press spokesman for the Greater Albany Public Schools.

“We did not transport anyone,” Tomsky said by email. “Nor was credit given or organized through any high school.”

That latter point was in response to another question. Via a Facebook message, someone had passed along a rumor that West Albany High School had given some students credit for attending the demonstration. Turns out the rumor was wrong, as rumors often are.

Conclusion: It looked like Tuesday’s protest crowd included lots of people of high school age, but Albany schools didn’t bus them there and did not reward them for showing up. (hh)

♦ Albany Police Chief Marcia Harnden has provided additional details on the buses. “We have received a lot of questions about that,” she said. Her explanation in full:

“When we were preparing for this event we had to take into account preparations for who might cause problems at the protest. Our job is to facilitate a safe event for the exercise (of) First Amendment rights.

“It is typical in large crowd gatherings that you use large vehicles such as dump trucks and buses to close roadways where large groups gather to protect against accidental of intentional vehicles from entering the roadway and harming attendees. It’s a longstanding tactic of people wanting to do harm to use a vehicle to drive into a crowd.

“That was the sole intent of using the buses. We also had the assistance of the City of Albany public works with a dump truck and transit bus if additional closures were needed.”

(The story has been edited to add the police chief’s explanation.)


5 responses to “Albany protest, why school buses were there”