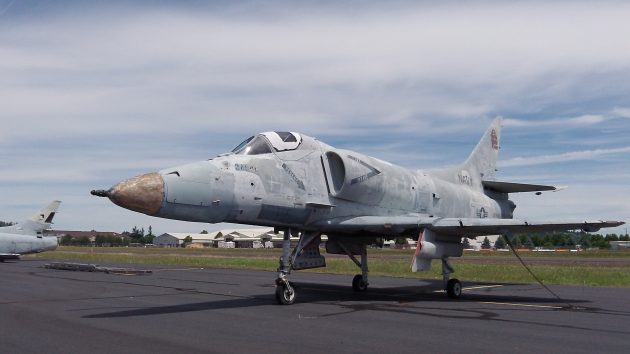 One of the A-4 Skyhawks the way it looked at the Albany Airport in June 2013.

The long-standing plan to put three vintage fighter jets on display at the Albany Airport has taken another step toward becoming reality.

I discovered this when, with time on my hands Tuesday night, I scannned the list of pending planning projects on the City of Albany website. There, I found a Dec. 21 decision by the community development director — that would be Jeff Blaine — to approve construction of “two 24-by-30-foot concrete slabs with mounting hardware for static aircraft displays.”

Both pads will be on Aviation Way, the airport access road. One is to be near the entrance off Knox Butte Road and the other between the airport and Interstate 5, in full view of people passing by on the freeway.

A group of private pilots at the airport — Jack and Heath Kasper, father and son, and Dan Miltenberger among them — got the project started about 10 years ago. The late Dick Ebbert, himself a former fighter pilot and then the city’s economic development director, briefed the city council about the plan in March 2007. The Albany group would obtain three mothballed A-4 Skyhawks from a warplane boneyard in Arizona. The state would take ownership from the federal government and the planes — stripped of engines and avionics — would then be loaned to Albany for display. The Albany group had to put up the $10,000 fee demanded by the state to handle the transaction, and they would get reimbursed by getting a break on their hangar fees at the city-owned airport. Eventually the pilots hauled the planes to Albany on trailers at their own expense.

In 2012, four students from the Albany Options School under the guidance of pilot and retired educator Jay Sluiter worked on the planes to help get them ready for display. A story in the Democrat-Herald showed them dismantling the inside of a fuselage. The idea was to take out weight because the plan then — now apparently abandoned — was to display the craft on a pole as if in flight.

Because the two pads will be in the Airport Historic District, their construction went through a special “historic review” at the city. The application submitted for the review suggests the third plane might be displayed on the east side of the airport facing Timber-Linn Park. But plans for that were not included.

The approval of the two pads is valid for three years. There was nothing in the paperwork available online to indicate just when construction might take place. This is a volunteer effort, so it probably depends on availability of funds. (hh)