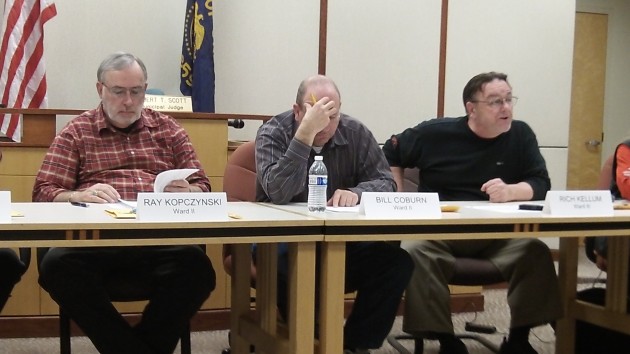 Councilman Rich Kellum (at right in this file photo) forced a delay in Albany’s planned fee increase on electric service.

The Albany City Council was all set to pass a $930,000 increase in electric taxes Wednesday. Five council members voted to go ahead, but Rich Kellum said no, which meant that the second and final reading of the ordinance containing the boost had to wait for another day.

The added money is already part of the city budget for the fiscal year that started July 1. There was no public controversy when the budget committee settled on this revenue boost during the spring, probably because the action was not reported. (Budget discussions usually put reporters and the public to sleep, so they don’t get much play in the press, or in this case any at all that I saw.)

Tom Cordier, the North Albany retiree who often urges the city to cut spending, spoke to the council Wednesday and complained about the electric boost. He ticked off all the money the city of Albany collects from utility customers in the form of franchise or “privilege” taxes, and he said the total amounts to about $4.2 million for the year. He found it “unbelievable” that now the city wants another $930,000.

Cordier objected to the emergency clause attached to the electric franchise ordinance, which includes the tax hike, because if citizens wanted to block it, they could not refer it but would have to try an initiative, which takes more signatures. City Attorney Jim Delapoer told the council later that the Pacific Power franchise ordinance was administrative — not legislative — and not subject to initiative or referendum anyway.

According to Delapoer, the emergency clause was attached because it allows the rate hike to take effect right away. Without the clause, ordinances take effect in 30 days, which in this case would cost the city — and save ratepayers — $76,000.

Kellum objected to the frequent use of the emergency clause when there is no emergency. And Delapoer said  the council can remove that clause whenever it considers it unwarranted.

Mayor Sharon Konopa felt it necessary to tell Cordier that the city charges utilities a franchise fee for the right to put their facilities on public property. She didn’t explain why, if that is so, it’s members of the very same public, the utility customers, who have to pay the fee.

The next regular council meeting is on July 22. Expect the electric tax to jump the following day.(hh)