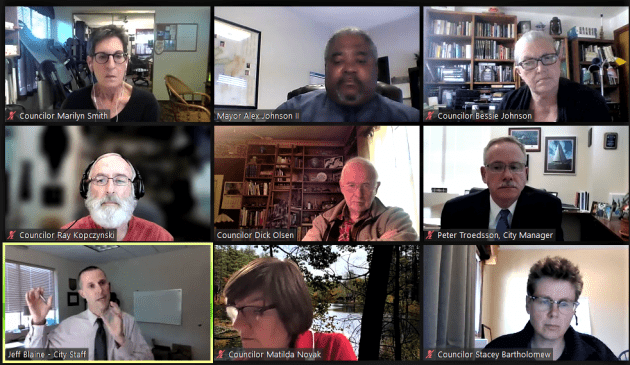 As expected, the Albany City Council is getting ready to set the base rate of the proposed city-services fee or tax at $9 per month for single-family households.

The council discussed this during its Monday work session. On Wednesday night, it will vote on actually approving the rate. This will set the stage for enacting the fee, perhaps at the regular council session on May 26.

At $9 for single-family households and proportional rates for other water and sewer customers, the fee would raise $2.8 million a year, roughly the amount the city needs to avoid staff cuts and service reductions in the police, fire and other departments in the two-year budget period 2021-23.

Councilwoman Bessie Johnson was ready to have the council take final action on the rate and on imposing the fee on Monday. But a resolution setting the rate and an ordinance imposing it had yet to be prepared.

There are about 80 commercial customers with three-inch or larger water meters. For them, the monthly service charge will range from $144 to $750. There’s one 10-inch meter on the city water system, and that customer will be charged $1,890 a month.  (The memo outlining the fee did not identify any customers, including the biggest.)

The first bills with the new charge apparently will go out in July, the first month of the new fiscal biennium.

The council talked about setting up a discount for low-income households, of which there are said to be about 2,500 in Albany. But that program would not be ready until about December, the council learned.

Councilman Ray Kopczynski proposed the $9 monthly rate in a motion. There was no vote — that will come Wednesday — only a show of thumbs. I didn’t see the raised thumbs because my Zoom screen was set on the speaker at the time instead of everyone. But apparently there was a near-consensus to go ahead with that amount. (hh)

11 responses to “Albany council zeroes in on $9 service fee”