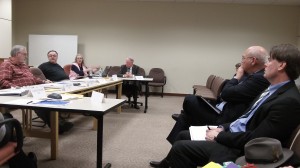 Marijuana was on the minds of the Albany City Council again Monday. I’m speaking figuratively, of course. The mayor and five councilors (Bill Coburn was away) were nothing if not sober at Monday’s work session, where they spent nearly an hour hashing over what the city government might do come March, when the state expects to start licensing medical marijuana dispensaries. You may recall that a few weeks ago, the council voted 4-2 to initiate a change in land use regulations banning any land use or business that is against state or federal law. That would ban medical pot dispensaries, because weed is a federally controlled substance. This change in the development code comes before the planning commission for a public hearing on Jan. 27. Assuming the planners go along, another public hearing will follow before the city council.

Some council members who sometimes grumble about federal mandates and overreach have developed a sudden fondness for “federal law.” Rich Kellum just wants the city to follow federal law. Bessie Johnson found it “terrible that the federal government is not prosecuting people who break the law.”

So they want the city to ban dispensaries. According to lawyers for the legislature, that’s not what lawmakers had in mind when they voted last year to authorize dispensaries. The legislature meets again in February. It could put an end to all this foolishness by amending the law to make clear that if the state licenses a dispensary, local government must not make it impossible.

Lawmakers might also take another step: To forestall an initiative legalizing the recreational use of marijuana, they could place their own measure on the ballot in November for the voters to decide. That would save everyone a lot of trouble. If it passes, it would also make moot whatever the Albany council does.

The city would be wise to sit back and see what happens. But that would require restraint. It would also show a willingness to help rather than hinder the nearly 2,500 people in Linn and Benton counties certified by doctors to use pot to ease whatever ailment they have. (hh)