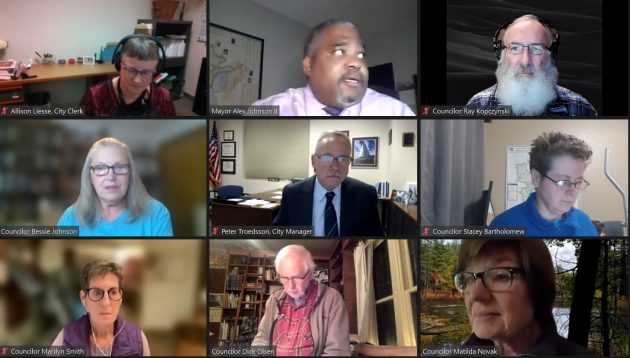 The Albany City Council and staff during the open part of Wednesday’s regular meeting.

Like a mystery novel that ends each chapter with a cliffhanger, the Albany City Council on Wednesday night left its audience hanging and wanting to know more.

At the conclusion of a long and routine session that dealt mostly with code changes intended to make housing more available and affordable, the council withdrew into an executive session closed to the public, as allowed by law. The announced topic was litigation.

When the council’s Zoom meeting re-emerged to where the public could watch, Mayor Alex Johnson II recused himself, meaning he wasn’t taking part in whatever might follow. Elected officials normally do that when they have or might have a conflict of interest.

To indemnify them means they don’t have to hire their own lawyers to defend themselves. The vote to approve the motion was unanimous.

Nobody thought it worthwhile to explain at least in outline what this was all about.

One of those who sat through the Zoom blackout of the public was former Mayor Sharon Konopa. “Very vague motion afterwards,” she said by email. Others also watched and were curious as well, she added.

Under Oregon law, reporters such as me are allowed to listen in on most executive sessions with the understanding they reveal nothing they learn there. I did attend this one.

The story is interesting, and the public should hear it, if only to understand more about the way our legal system operates.

I’ve emailed the city attorney a request for a pertinent public record, the kind of record that is routinely released in other Oregon jurisdictions. Assuming I get what I asked for, I can tell you the rest of the story then. (hh)


15 responses to “Albany council leaves viewers in the dark”