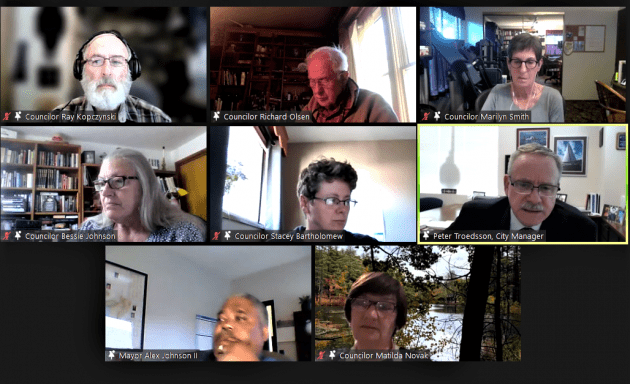 The Albany council and city manager during Monday’s work session, when a new utility fee was again discussed..

Staff work continues on a new Albany utility fee to support city services. And while no decision has been made to collect such a fee, no one on the council has objected in any of the meetings where it was discussed.

The same thing — no one saying stop — happened at Monday’s work session as the council got a report on the progress of planning for this monthly addition to the city’s water bills.

In March the council approved a method for applying the fee. On May 10, it is scheduled to pick a rate, which likely will be $9 a month for single-family residential households, $7.20 per unit for apartment houses, and $22.50 for most commercial and industrial customers.

At that level the fee would raise an estimated $2.8 million a year, roughly what the city would need to cover an anticipated shortfall of $5 million during the two-year budget period of 2021-23, which starts in July.

City Manager Peter Troedsson told the council the budget proposal is being built without revenue from the utility fee, with cuts in a number of departments. If the council imposes the fee, the cuts presumably could be restored.

The fee is being proposed as a way to address what Troedsson calls a chronic long-term imbalance between income and expense.  The state constitution limits property tax hikes on individual properties to 3 percent a year, while the city’s expenses rise 5-7 per cent.

The council got figures for monthly fees added to utilities in seven other cities, ranging from $4.50 in Sandy to $15 in Gresham. Corvallis charges $13.54 a month.

As the city manager has said more than once, no decision to collect the fee in Albany has been made. But if the council was against it, it would have said so. (hh)