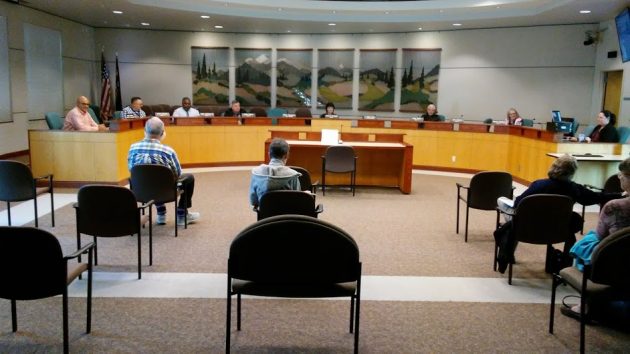 Social distancing for the audience at the Albany council’s meeting Wednesday.

Social distancing is the new motto for everyone including the Albany City Council as long as the corona emergency lasts. This was demonstrated, in part, when the council met briefly Wednesday afternoon to ratify an emergency declaration the mayor had signed last Friday.

Most of the public seats in the council chamber had been stacked in a corner, leaving only a few that were spaced about 6 feet apart. Public attendance at future council meetings will be limited to 25, and only elected members will sit behind the dais, unless they attend by phone as Councilor Bill Coburn did Wednesday.

The next council session will be March 25. Like most regular meetings, it’s broadcast on cable TV and the city’s website.

City Hall will operate, but starting Thursday (March 19) only people with appointments will be allowed in. Officials are urging the public to do any business with the city by phone or online. Payments can be made at a drop box by the door on the Ellsworth Street side.

Various other precautions or actions — including taking public library books to the food distribution sites at some schools — are outlined on cityofalbany.net.

The emergency declaration authorized the city administration to spend city funds as necessary to respond to the outbreak. It does not amount to anything resembling martial law. It doesn’t give the city manager any new power to regulate what people do or how they  act.

City Manager Peter Troedsson, though, pointed out that “social distancing” does not mean “social disengagement.” On the contrary, while people should stay away from each other as much as possible to avoid spreading the contagion, its everyone’s obligation to do what they can to look out for their neighbors.

Council members spoke against panic buying and hoarding of necessities. As people have emptied store shelves in Albany and elsewhere, they have deprived others including mothers with young children of things they need.

Councilor Mike Sykes made this related point: We’ve all been warned often about the big earthquake that’s expected any time, though no one knows when. If we’re not prepared to weather the coronavirus emergency, we sure won’t be able to survive the much bigger disruptions and shortages after the big one hits. (hh) 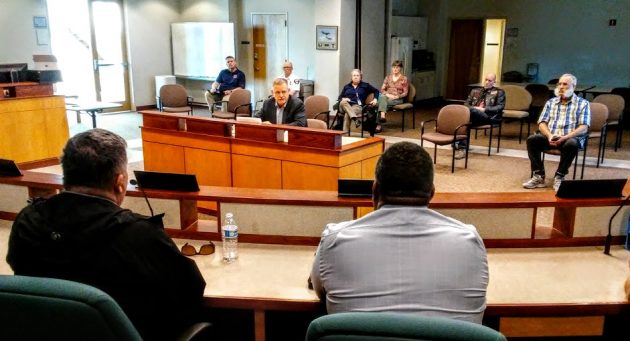 
One response to “Albany council: Fewer seats for audience”