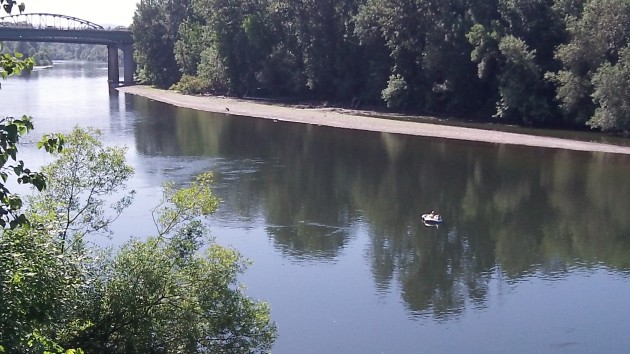 There’s no good way to illustrate a sewer-rate story, so how about a view of the Willamette River? It’s running low this spring, but not so low that people can’t drift down the river in rafts.

As originally published on June 11, this story contained an error. Albany water rates went up 2 percent on Jan. 1, and no additional increase is planned until Jan. 1, 2016. As for sewer rates, the city council on June 24 opted for a 6 percent increase to take effect on July 1. (hh)

Albany city utility fees are going up this summer, and the prospect is for additional increases later on that might move Albany up the ladder in utility price comparisons among Oregon cities. Now it’s in 10th place.

The city council has already approved a 2 percent water rate increase to start July 1.(See correction above.)  Now it is preparing for a public hearing on June 24 to raise sewer charges up to 9 percent. The public works department had recommended a 6 percent hike, but a long-term financial projection called for 9. Which it will be the council will decide.

With a 6 percent sewer hike, Albany households using 800 cubic feet of water would pay a combined city utility bill of about $106 a month, ranking 10th from the top on a list of Oregon cities compiled by Public Works. Charges include street and storm water fees in some towns, but Albany has neither.

Portland is tops with $162 a month, followed by Lebanon with $132. Corvallis charges much less, about $76. Councilor Floyd Collins said that’s partly because Corvallis years ago paid for system improvements by selling city-owned timber.

In Albany, the council has been getting briefings on storm water to prepare for what likely will be a stormwater utility that will add to monthly bills. Current sewer rates are calculated to build up reserves to replace old and failing pipes. They do not, however, cover the cost of making major improvements that city engineers estimate may cost some $30 million. For that, Public Works official Jeff Blair told the council Wednesday, the staff will propose a funding mechanism later on. Chances are that will raise utitity rates again. (hh)