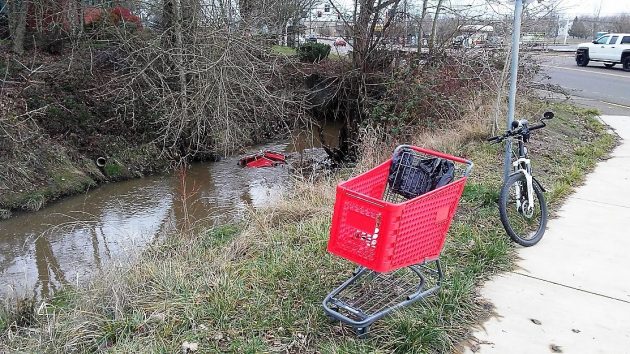 Abandoned shopping carts: Two in Periwinkle Creek, one on the creekside bike path at Queen Avenue on Saturday.

In 2008, the Albany City Council passed a law intended to help return stolen shopping carts to the stores that own them. Almost 11 years later, we can see it hasn’t worked well, if at all.

A week ago Saturday two red shopping carts were mired at the bottom of Perwinkle Creek just off Queen Avenue. A week later, yesterday, another one was abandoned on the bike path above. I could see no store name or other indication from where these particular carts had been purloined.

These were only the latest examples of shopping carts that I’ve seen abandoned in various places around town. This is not a new phenomenon. It goes back many years, and it was on May 28, 2008, that the council tried to do something about it by enacting what it called the “Shopping Cart Ordinance.”

The law required businesses to put their names on their carts along with a local telephone number that finders of abandoned carts could call to have them retrieved. Signs on the carts also were to announce that “unauthorized appropriation” of the cart is a crime under state law.

On that Wednesday night in May 2008, the city council adopted this ordinance by a vote of 5-1. The lone dissenter was Bessie Johnson, the Ward 3 councilor who has just been re-elected to her fifth four-year term.

Before the vote, Johnson explained herself, according to the minutes: “Johnson said she will be voting no because the people she talked to are not sure why we need another ordinance on the books that may not be enforced the way we want it to be.”

You can think of her as Prescient Bessie, on this issue at least, the next time you come across one of these abandoned carts. (hh) 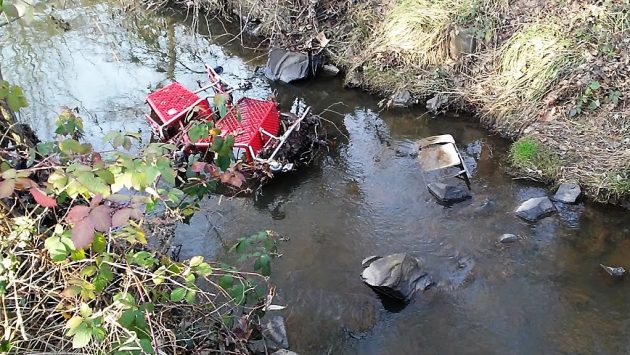 Carts and other trash at the bottom of Periwinkle Creek on Nov. 12.


23 responses to “Albany cart law looks like a flop”