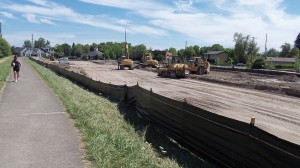 Looking south, the Periwinkle Path is on the left of the apartment site.

Wondering what the heavy earth-moving is all about between Oak Street and the Periwinkle Bike Path on the north side of Albany’s Queen Avenue? A Salem contractor has been preparing the 3.1-acre site for an 81-unit apartment complex.

The city’s planning department approved the site plan for the project in May. According to the plans submitted on behalf of Oak Street Apartments LLC of Salem, there will be five three-story buildings with dwellings and one recreation building. The plans are for 48 apartments with two bedrooms and two baths each, and 33 one-bedroom, one-bath units. Drawings for the project show 128 parking spaces, mostly on the side bordering the bike path, and 28 spaces for parking bicycles.

The site had been a vacant field for decades. It is south of a church and the city’s new Kinderpark. At the north end of that segment of Oak Street, recently upgraded to city standards, Lowe’s plans to build a home improvement center starting this year, and completing it in 2014. (hh)

From Wilma Albright, via Facebook: Thank you. Was wondering what was going on there.

Postscript: A letter writer in the Albany paper wondered what happened to the wetlands on this project site. I asked David Martineau at the planning department about it. His answer: “According to the City’s Local Wetland Inventory, Fish and Wildlife’s National Wetland Inventory and our significant wetland and waterway overlay map, there are no wetlands on the property.  The property does, however, have a thin section of riparian corridor overlay. That 50-foot overlay begins from the surveyed ordinary high water mark adjacent to the west bank of Periwinkle Creek, crosses the bike path, and enters the subject property for a distance ranging from near zero to about 20 feet at its widest point near the southeast corner of the property. Most of that riparian corridor setback on the apartment property is not being developed, but in a few instances where the parking lot encroaches into it, the property owner is required to provide trees and shrubs listed on Albany’s native plant list as mitigation. There is no outward sign that this riparian overlay has features of a wetland. In the field, it has the appearance of relatively flat grass and weeds that grow on both sides of the bike path.”