Alb-Cor Bike Trail: Where to now? 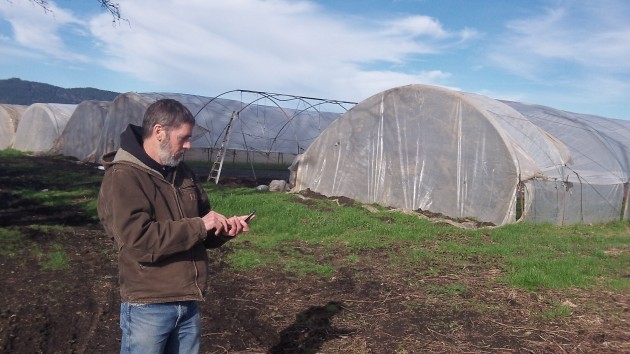 Tom Denison on the phone on his farm.

Well, “bogus” was the wrong word. I used it in a headline on my Jan. 16 commentary about objections by a dozen land owners to the proposed route of the Albany-Corvallis Bike Trail. Farmers along the route have concerns that are very real, as I learned Saturday in a visit with one of them.

I met with Tom Denison, owner of Denison Farms LLC, which grows organic produce, provides work for as many as 30 employees during the busy season, and had an annual payroll last year or nearly $1 million. On Google maps, the path could easily run along the northwest side of the Albany-Corvallis rail line owned by Union Pacific and leased and operated by the Portland & Western. But the railroad has refused the use of its right of way. (And the state years ago failed to exert any leverage over the railroad even while it gave PNWR millions of dollars in grants.)

In some fields next to the tracks there’s a makeshift road used by farm vehicles. If the path is built there, the farmers would need a new road on the other side of the path, taking even more land. In Denison’s case, he would lose six long greenhouses or have to rebuild them elsewhere. (He says one he had built cost around $200,000, but it was a special case and moving six would cost less than six times that amount.)

What about that long blackberry hedge between the railroad and his greenhouses — couldn’t the path go there? The berry bushes form a protective shield for his organic operation when the railroad comes through and sprays for weeds along the rail bed. So no, the brambles have to stay.

What about traffic? I don’t see any this Saturday morning, but trucks routinely go to and from this farm on the end of Steele Avenue, and on other crossings to the grass seed operations to the north and south. And sometimes 18-wheelers come down Steele, rumbling over the tracks on a deeded crossing and immediately hitting the path if it’s there. ODOT Rail has raised concerns about a path right next to railroad crossings. Indeed, half a mile away at Conifer, signs attempt to ban even walkers from crossing the street in a situation just like the ones to be created by the path. And even if that’s worked out and there are no collisions, whose liability insurance would rise just because now there’s the possibility of trouble when there wasn’t one before?

I have scoffed at the farmers’ worries that a path in their back or front yards would lead to more vandalism and crime. Denison has an anecdote or two. Some kids came to steal strawberries; he talked to their leader and they’ve not come back. Another time, persons unknown had a drug party or something in one of his greenhouses. He found the trash they left behind, including a hypodermic jabbed into a tomato. He also reminds me that just last year some kids were goofing around on a Corvallis path and started a potentially disastrous brush fire.

Denison is an outdoors kind of guy who used to ride his bike all over the valley. He says there should be a bike trail between Albany and Corvallis, but running it through working farms on that side of the rail line is wrong. Now he and his fellow farmers are in a position to delay the project long enough to probably kill it. (They could appeal a conditional use permit in the event the Benton County Planning Commission eventually approves one, which is not a sure thing.)

Is there a way to salvage this project? I don’t know. If not, the alternative is to start over and explore another route that accomplishes the same thing, a direct bike link, separated from heavy car and truck traffic, between Albany and Corvallis. The 2004 feasibility study by Benton County of the “”Rails with Trails Albany to Corvallis Pedestrian and Bicycle Path” contained good advice. It said the project was feasible but various things would have to be done, including this: “Property owners also need to be involved to obtain their input regarding local information to assist in determining the best design and location.” (hh)

(This story has been edited to clarify a sentence about the likely cost of replacing six greenhouses on the Denison farm.) 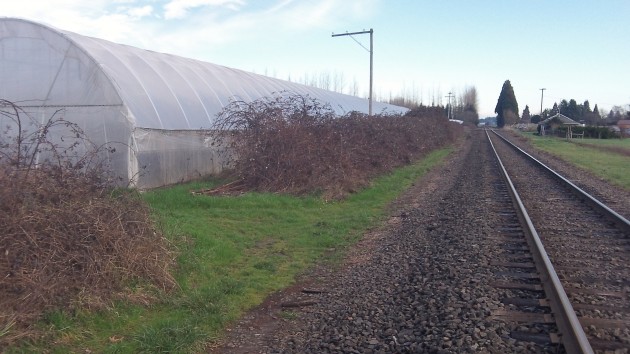 You’d think there would be room to squeeze in a bike trail, but apparently not.


8 responses to “Alb-Cor Bike Trail: Where to now?”