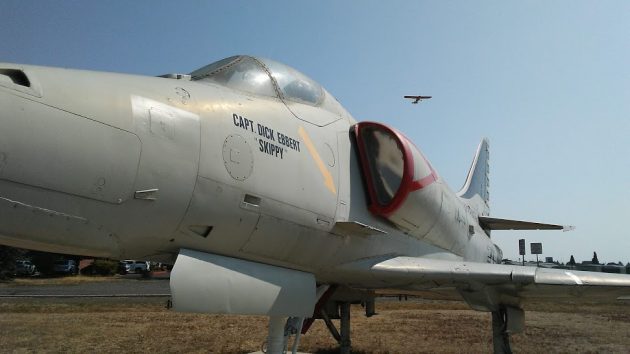 At the Albany airport, a plane takes off Tuesday over the newly placed Skyhawk.

A year before he died, Dick Ebbert had a cool idea: Get three old warplanes of the type he had flown as a Marine fighter pilot and put them on display at the historic Albany Municipal Airport. Volunteers worked on the project for a decade, and now it’s been carried out.

One-third of it, anyway. I noticed it on Tuesday as the bike took me past the airport on my way to check out something else. There, at the corner of Knox Butte Road and Aviation Way, a Dougas A-4 Skyhawk was anchored to its concrete platform.

This was unexpected. Had I missed some announcement? Apparently not, as I learned when I sent questions to Jon Goldman, in charge of the airport as the city’s transportation manager. When was it put there? Who made it happen, and what’s the story on the other two jets?

“It was placed yesterday,” he replied this morning. “Forslund Crane did the lifting. We’re waiting for authorization from the state/feds to scrap, or return, the other two. Volunteers did the majority of the work.”

I’ve followed this story since 2007, when Ebbert, then Albany’s economic development director, briefed the city council. His plan was to obtain three surplus A-4 Skyhawks from a government boneyard for old planes in Arizona and mount them as a static display at the Albany airport.

Ebbert, an Springfield native, had served as a Marine Corps pilot during the Vietnam War before returning to Oregon for a long career as a manager with Pacific Power. He worked on economic development in the mid-valley, southern Oregon and northern California and, after his retirement from the power company, joined the Albany city staff.

After Ebbert’s death in 2008 at the age of 65, volunteers associated with the Albany airport carried on his plans for the Skyhawks. The government wanted $10,000 to lend the surplus planes to the state of Oregon.  Local pilots and aviation buffs came up with the money and went to Arizona to get the planes, in pieces and stripped of engines and other equipment.

Off and on, they worked on putting the planes together ever since. The project proved daunting, though. They concentrated on getting one plane complete. Now, as Goldman said, they’re waiting for word from the government, which apparently and technically still owns them, on what to do with them.

The original idea was to mount the three planes on poles to resemble a formation in flight. But even just one of the jets sitting there, gleaming in the sunshine, is an interesting sight. (hh) 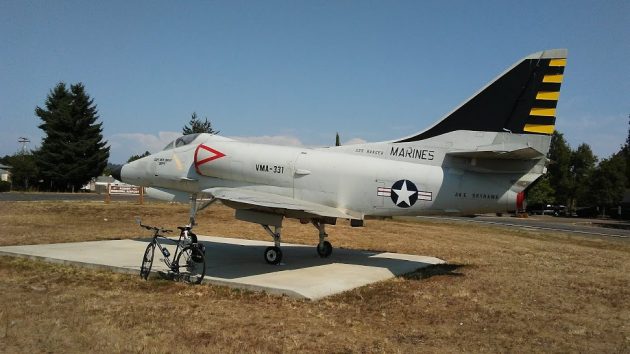 The Skyhawk has taken its place near the entrance to the Albany airport. 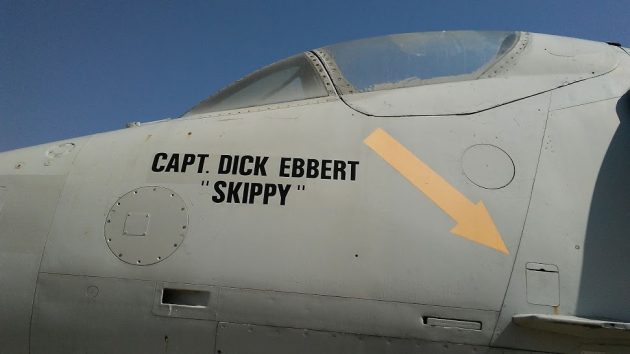 The plane honors the Marine Corps pilot whose idea it was to bring it to Albany.