Air guns, police and what can happen 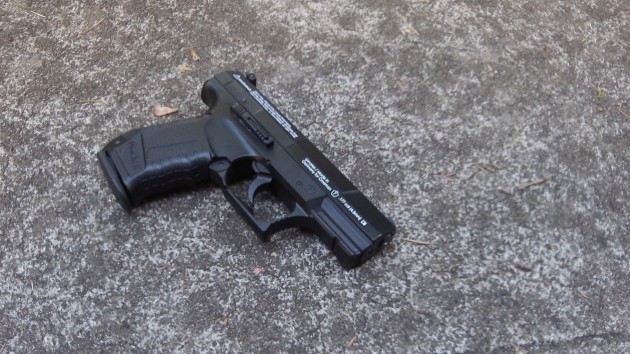 You have to get pretty close to be sure that this CO2-powered Walther is not a firearm. (A different style gun figured in the Albany incident.)

California is trying to do something different about look-alike guns that are sometimes mistaken for the real thing, which has led to tragic results. But even if Oregon did the same, it would not prevent incidents like the police shooting and wounding of a suspect near Albany last week.

Press reports in California said the legislature in Sacramento last week had passed and sent to the governor a bill requiring some air guns to be either made entirely of translucent material or manufactured in various bright colors. This was in response to several cases, including the death of a 13-year-old boy whose airsoft rifle had been mistaken by police for a real AK-47.

California law already bans the sale of “imitation firearms,” but BB and pellet guns are exempt from the ban, and so are devices that are either completely translucent or white, bright yellow, orange, red, green, blue, purple or pink. According to its online summary, the new legislation, which takes effect in 2016, will affect only airsoft guns that shoot 6- or 8-mm projectiles. And those, in addition to the orange ring in front of the muzzle already required by federal law, will also have to have “fluorescent coloration over the entire trigger guard and a fluorescent adhesive band.”

In short, this is a minor law change that does not affect most of the air guns modeled on firearms, and it will not make any difference in the cases where criminals wave around air guns as if they could shoot bullets. Those things are made to look like firearms because that’s what the buyers want. They want something realistic for practice or target shooting, and sometimes for pest control even though a rat probably could not care less where the pellet that hits it came from.

In the Albany incident, in the middle of the night early on Aug. 28, a woman had been fleeing from police in a stolen car. When she finally stopped near a gas station and store off the freeway, she ran toward the store waving a gun. The image of it released by the police makes it appear to be a pellet-firing semiautomatic of the 1911 style. It is black, but the color would have made no difference. Modern firearms come in colors including pink.

Officers following her saw she had a weapon, and even if she had not pointed it in their direction, she was clearly desperate and could not be allowed to get in the store and endanger whoever was there. I would say the officer who stopped her by shooting her was clearly justified. (As of Wednesday she was still recovering from a leg wound at the Corvallis hospital. Side question: Who pays the hospital bill in such a case? Likely answer: The taxpayers.)

The big question: Why do people brandish air guns in confrontations with law enforcement? What do they hope to do or gain? No matter what, they’re not going to shoot their way out. It’s impossible to know what someone else is thinking, but anybody thinking at all would know that this will likely get them shot. (hh)


One response to “Air guns, police and what can happen”