‘Affordable housing’ — Not on this lot 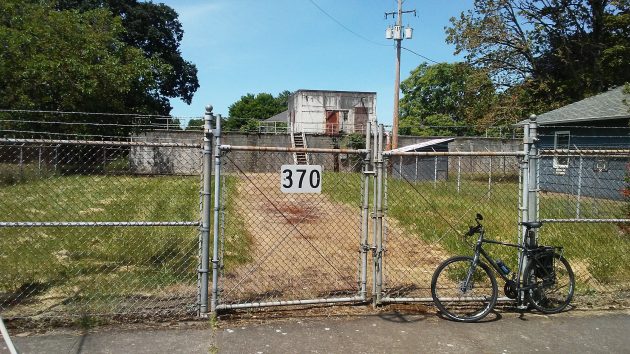 The abandoned reservoir on Burkhart Street on June 10.

A surplus city-owned lot at 370 Burkhart Street was considered for developing “affordable housing” in Albany. But the idea foundered on the likely cost of clearing the property of a decommissioned water reservoir.

Albany gets federal grants under the community block grant program or CDBG. Its annual plan for how to spend that money in 2019 was just adopted by the city council. The plan still lists the Burkhart Street property as a potential site for housing. But the chances are remote that it will ever be used for that or anything else.

A story about this property appeared here in August 2015. An Albany couple out for walk had wondered what it was, and I tried to get the answer. As it turned out, the concrete structure on the back of the lot was part of the Albany water system when it was still owned and operated by Pacific Power & Light. The information I got was that it was a reservoir that could hold 750,000 gallons and was built around 1963.

Evidently it was built exceedingly solid.

Anne Catlin, the member of the city planning staff who handles the community block grant program, said the city got an estimate of what it would take to demolish the thing and clear the site. She told me the estimate was $450,000 “to remove the structures and 20-to-30-foot-deep concrete bunker.” And this, she added, “far exceeds the CDBG funds available for clearing the property.”

The Linn County assessor estimates the lot’s real market value to be $62,420. But no one would pay that for a useless concrete structure and tank. (hh)


5 responses to “‘Affordable housing’ — Not on this lot”