Adventures, sort of, at a grade crossing 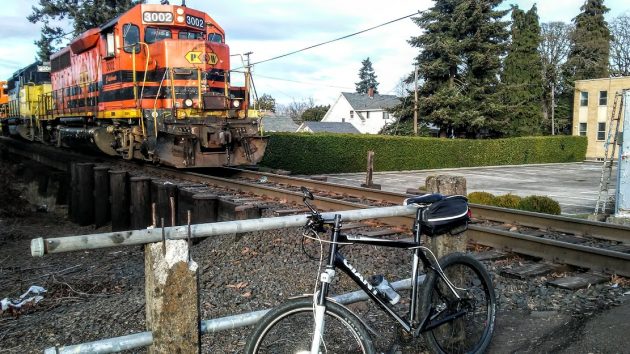 A Portland & Western freight gets ready to cross Second Avenue on its way to the Albany yard on Tuesday.

Two things I had not seen before I happened to stop at the Second Avenue railroad crossing in Albany on Tuesday afternoon. One was the remarkable mural visible from the track. The other was the crossing gates coming down again and almost nailing a couple of cars after the train had passed.

You’ll see what I mean when you click on the five-minute video below. But turn down the sound or mute it altogether. Otherwise the warning bell will send you up the wall.

The freight was on the Toledo Branch coming across the river. It had been waiting for clearance to enter the Albany yard. Then, as you saw, it cleared the Second Avenue crossing and stopped again, to wait some more.

The video stops eventually, but soon after it does, the gates did another shuffle step — up and down, almost clipping two vehicles that managed to get through.

I don’t know if this is a common occurrence at that crossing. If so, the sensors or electronics controlling the arms and the bells could use an adjustment.

And drivers, better wait a few seconds after the crossing arms rise. Make sure they’re going to stay up.

As for the mural right next to the track, it’s across Second from Cool’s Feed and Pet Supply. Next time I go in there for bid seed and suet, I’ll ask if they know anything about the colorful painting across the street. (hh) 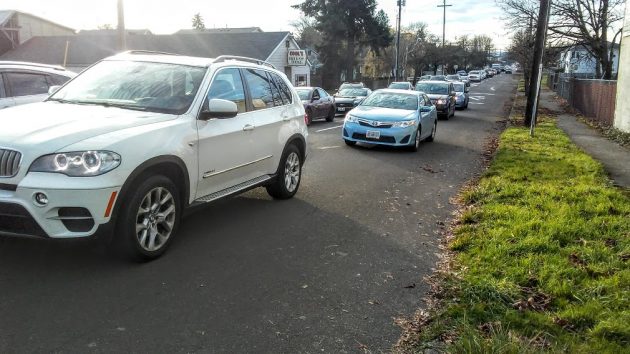 Traffic waits on Second Tuesday afternoon while the gates are down even though the crossing is clear.


10 responses to “Adventures, sort of, at a grade crossing”