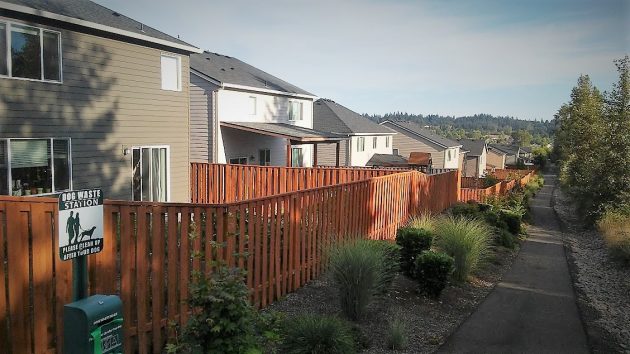 Not much room for accessory dwellings in this new North Albany neighborhood, at least not in the back yards.

Albany Mayor Sharon Konopa has vetoed a council-passed ordinance on accessory dwellings, hoping the members will agree on changes that she and all the councilors can support.

She submitted her two-page message — the first veto in her 10 years as mayor — on Friday. The council can override it, but it takes five votes to do so. Two of the six council members opposed the housing amendments to the city development code when the ordinance was acted on Wednesday, so any override without changes in the text is unlikely.

The 2017 legislature required cities and counties above certain sizes to allow “at least one accessory dwelling unit for each detached single-family dwelling, subject to reasonable local regulations relating to siting and design.” The units can be inside homes, or attached to the outside, or detached. The bill, SB 1051, passed the Senate 29-0 and the House 59-0.

“I do not feel,” the mayor wrote, “ADUs are a solution to the lack of low-income housing and the state has placed a burden on local governments in dealing with the unintended consequences.”

The Albany code does not comply with SB 1051 because it bans detached accessory units in some areas where single-family houses are permitted. Hence the amendment passed Wednesday. But there also were other changes, and those are what concerned Konopa.

In particular, the code amendment raises the allowed size of ADUs from 750 to 900 square feet. Konopa says this allows for two-bedroom units that could be occupied by four adults with four vehicles. “This can impact an existing single-family neighborhood’s livability,” she wrote.

She added: “The ordinance changes the current parking requirements of one off-street parking space for an ADU by allowing on-street parking, if there is enough street frontage.” And this, she wrote, “can transform the character of an existing single-family neighborhood into a multi-family.”

There’s no requirement in SB 1051 to increase the allowed size of accessory units or relax parking-space requirements. So why do so, her point seems to be. “I believe we should strive to lessen the impacts on existing neighborhoods,” she wrote.

Her message said she would have liked to have more discussion on those points at the council’s Wednesday session but this was prevented by a “call for the question.”

“My veto is to have a discussion over some amendments to help address all councilors’ concerns,” she wrote. She hopes to have the discussion and resolve the issue at the council’s next meeting. That’s a work session on July 23. The next regular session is on July 25. (hh)