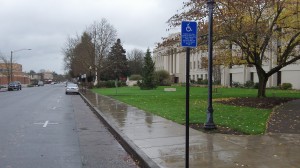 Sign marks one of the two designated spaces near the Linn County Courthouse in downtown Albany.

Albany city officials say that federal law requires parking lots to have at least one space accessible to the disabled per 25 spaces. The city requires a permit if those spaces are going to be restriped once the paint has worn out, and in response to business complaints the council has just lowered the permit fee to $75 for all but the biggest lots. Someone reading about this wondered why the same requirement does not apply to the public streets.

The simple answer is that federal law does not require accessible spaces on public streets, and in any case, the presence of curbs on one side and traffic lanes on the other of most street parking spaces makes it physically impossible to provide a level spot where someone in a wheelchair could safely get out of a car or a van. As it happens, though, the city of Albany has gone beyond what the law requires and provided at least three accessible spaces on city streets. I found two of them near the county courthouse downtown, on Fourth and Fifth avenues near the intersections with Ferry Street. Another is near a state office a few blocks away, Ron Irish of the city told me. He says the spaces were located there in response to requests. They were installed close to the sidedwalk ramps at the street corners, so that if a wheelchair owner got out of his vehicle there, he could more easily get on the sidewalk that leads to the offices nearby.

So that’s the answer in regard to accessible spaces on streets: They are not required, but the city administration in Albany does what it can anyway to try to provide them when it is asked. People who have trouble getting around need all the help they can get. That’s why Albany, unlike some other towns, tries to makes sure parking lot spaces are properly marked, and why it goes beyond the bare-bones requirements to provide some help on city streets as well. (hh)