About our alleys: More than a shortcut? – Hasso Hering

About our alleys: More than a shortcut? 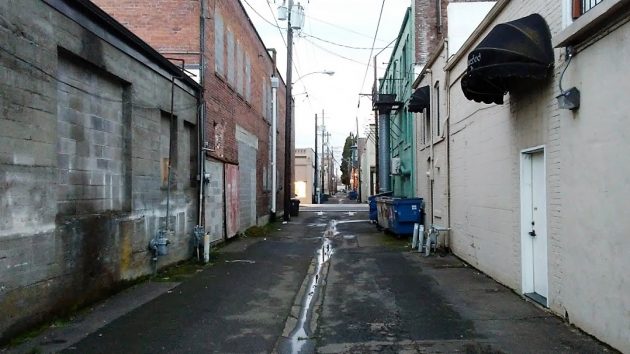 Between First and Second, this alley connects Lyon and Ellsworth streets, then keeps going west.

A couple of days before Christmas I took a shortcut through a downtown alley. This made me think of one of the forgotten goals of the Central Albany Revitalization Area.

The CARA program had 52 possible goals when the city council adopted it in 2001. Most of them have been passed over or set aside. One those is goal No. 33, which says, “Alley redevelopment. Improve drainage and pavement in downtown alleys and establish an alley maintenance program.”

What could you do with alleys? Well, the plan proposed to “create pedestrian corridors along downtown alleys through screening trash receptacles, pavement restoration, opening rear business access, and related improvements.”

On the subject of alleys, like on almost everything else, Wikipedia has a lot to say. Look it up. There are plenty of examples around the world of alleys that offer pedestrians something to see, do, or buy.

Could that be done around here? Probably not to any large extent. And certainly CARA has shown over the past 18 years that it’s not interested in pushing this part of its plan. But if property owners had an interest, maybe one or two of the downtown mid-block passages could be turned into business assets rather than places most people would rather avoid.

I went down that alley the other day because I parked in the Albany Regional Museum lot and headed over to the Antique Mall on Ellsworth and Second. You’re not supposed to park there except to visit the museum, but the museum was closed and I figured no one would mind. (hh)

7 responses to “About our alleys: More than a shortcut?”