A stand of timber outside Albany: Gone – Hasso Hering

A stand of timber outside Albany: Gone 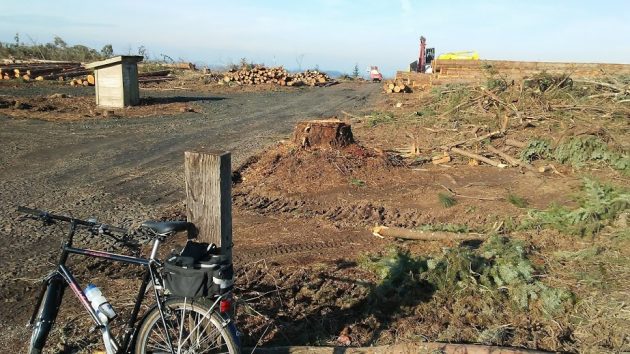 Looking north from N.W. Palestine Avenue, where a thick stand of timber has been logged.

“Have you been out Palestine Road lately?” Brenda Stevens Herbst asked on Facebook Wednesday. “Logging like crazy. Wonder what’s going on.” I went to take a look on Thursday afternoon, and the photo shows the result.

Our elder son asked me the same thing when he and his wife arrived for Thanksgiving. They had come up Northwest Palestine Avenue, and he was surprised that what he remembered as Otto’s Christmas tree farm was no longer there.

Christmas trees? That was probably 40-some years ago. In the years since, the plantation had grown into a thick forest. The place is just minutes from our neighborhood and once, years ago, I went off the road to explore what looked like a path through those woods, only to hit a root or something and fall off my bike.

What’s been going on now appears to be this. The trees in that stand, totaling about 25 acres according to my measurements on Google Maps, reached a merchantable size and the owners apparently decided the time had come to sell the timber and have it turned into logs to be trucked away.

Benton County records show the timber stood on property that is owned by two people with addresses in Monmouth and in Scottsdale, Ariz. I could not reach them to ask what they intend to do with the acreage once the logs are hauled away.

They two own two parcels there, on the north side of Palestine Avenue, one of 80 acres and the other of 111 acres, according to county records. The land is taxed way below its market value as farm or range land and zoned EFU, for  exclusive farm use. So development of the formerly forested site is impossible or at least highly unlikely. (The property is a couple miles or so outside the Albany urban growth boundary.)

In the Benton County Planning Division, Associate Planner Kristin Anderson checked and sent word that no application for any kind of land use change had been filed on either of the tax lots in question, nor any plans for a barn.

Until I find out differently, the most likely prospect is that until the land is put to some other “exclusive farm use” — maybe trees again, or hazelnuts like much of the rest of the valley — travelers to Palestine will be looking mostly at stumps where green trees used to be. (hh) 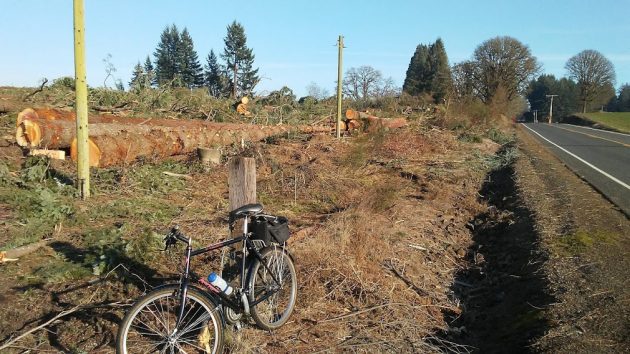 N.W. Palestine Avenue on the right, logged-over woodlands on the left on Thursday afternoon.

On Google Maps, the site still looks like this.

10 responses to “A stand of timber outside Albany: Gone”