A rally in red, but no one missed school – Hasso Hering

A rally in red, but no one missed school

Several hundred Albany educators rallied for more funding today, but unlike some other Oregon districts, GAPS didn’t shut down to make the demonstration possible.

For years, Wednesday has been an early-release day in Albany schools. As Ben Black, a spokesman for the Greater Albany Public Schools, told me, schools today let out at 2:45. That gave teachers and other employees 15 minutes to get to the field at Central Elementary School to make it to the 3 p.m. rally.

After half an hour of speeches and sporadic applause, many of the assembly walked a block to the Pacific Boulevard overpass to make their point with passing traffic.

In the video above, the wind plays havoc with the voice of Frank Bricker, the school board member addressing the crowd. But as far as I understood him, he was recounting how programs such as PE and art have been reduced or cut over the years because school funding fell short of what was needed.

Most of the people on the field wore something red. Apparently the color has acquired a new, positive meaning in connection with public education.

Since the subject was funding, I looked up the Albany school budget for 2018-19. All I could find on the GAPS website was the proposed budget, and I assume the approved one wasn’t posted because there was no change in the numbers.

In any case, the district’s general fund, which pays for most of what we consider schooling, is down this year — about $102 million compared to $105 million last year. So the people at the rally have a point.

The overall budget, though, ballooned from $303 million last year to almost $322 million this year. But that includes capital projects, including the many millions for building two new schools and renovating many others. It also includes $9.5 million for a new “transportation facility” or bus barn.

So what does schooling in GAPS cost? The budget shows an expenditure of all funds of about $10,200 per student. The figure is from a table that ends in 2016-17, but presumably the current amount is about the same.

School people around the state are asking the legislature to spend more on schooling. And the majority party is about to pass a billion-dollar-per-year tax on gross sales of $1 million or more, a tax that will affect about 40,000 businesses and their customers. Whether any of that actually leads to more students having greater success, as the proponents expect, is a question nobody can answer until a few more years have passed. (hh) 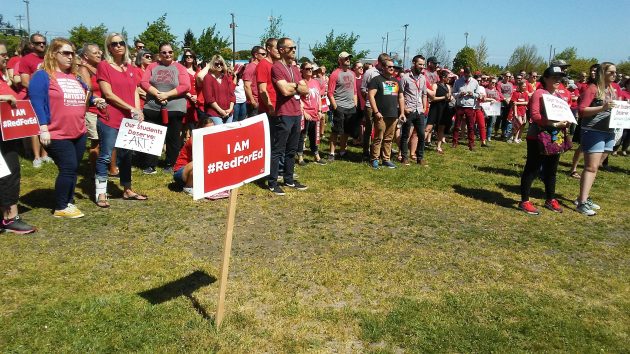 11 responses to “A rally in red, but no one missed school”