A rain tax in Albany’s future? 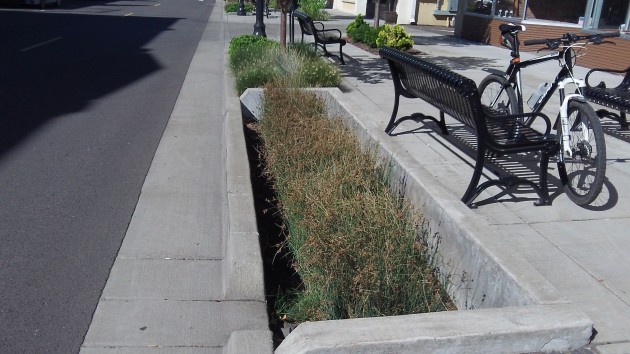 Features like this on Broadalbin Street are intended to collect and filter runoff from the street.

Albany is launching a regulatory program to keep rainwater in new land developments out of storm drains so it doesn’t carry pollution into creeks and rivers. Not now, but sooner or later this is going to cost some money to administer, and when it does, the city may want to collect a monthly stormwater utility fee. Fair or not, it will be known as a tax on rain.

The city council Wednesday stopped short of enacting the program. Councilor Bessie Johnson wanted to learn more about the fees that developers would be charged. She and Councilor Bill Coburn voted against enacting the 82 pages of code amendments in one sitting, so the final vote was put off until Sept. 24.

The program seeks to have Albany comply with federal and state clean-water regulations. In summary, starting in 2015 it will require construction projects of more than one acre to also get permits for, design and build swales or other “facilities” to collect runoff from paved surfaces and roofs. To issue the required “post-construction strormwater quality permits,” the city would charge  fees depending on the size of the facility and whether the private owner or the city has to maintain the facility in perpetuity. One code change would make sure that city inspectors could go on private property to check that the facility is working. That provision and others drew objections from Dan Watson, a private engineer who testified on behalf of the Willamette Valley Homebuilders.

How much work this program takes to administer will depend on how much development there is. Existing buildings and parking lots are not affected. City officials say they want to run the program for a year or longer without adding staff to see how much work and expense it causes. If the costs are significant, they may eventually propose a stormwater utility fee for the council to adopt.

It certainly makes sense to let rainwater soak into the ground in ways that filter out pollution from streets and parking lots. But it’s hard to believe the Founders’ idea of a free country included the need for government permits, a special tax or no-warrant inspections to regulate where rainwater ends up. (hh)


5 responses to “A rain tax in Albany’s future?”