A question of speed and cost 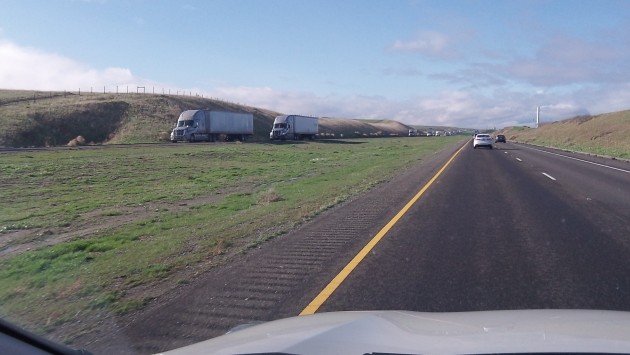 Like here on I-5 in California, 70 mph will be the legal speed on I-84 from The Dalles to Idaho starting in March.

No, ODOT says, the new signs announcing higher speed limits on highways east of the Cascades are not quite as expensive as officials had projected. Still, getting ready for the speed change authorized by the 2015 legislature is not a simple matter of just putting up new signs where the old ones used to be.

A reader called my attention to a Jan. 17 story on OPB, which reported the new signs were costing about $1,700 each, which seemed a little stiff. Actually, Peter Murphy of ODOT told me Friday, that amount was an early estimate provided to the legislature. He said the highest cost for a sign he had seen was about $1,100, suggesting that most were costing less. Whatever the amount of the 900-1,000 signs made necessary by the law change, it’s an internal cost to ODOT that includes whatever the agency allocates for its employees to design, engineer, produce and then install highway signs. In some cases where additional signs are called for, even an archaeological evaluation is required before a crew can did the hole for a new post.

Why additional signs? Because the speed change means some will be needed in places — ahead of curves and outside of towns, for instance — where none were needed under present speed limits.

Starting March 1, the top legal speed will be 70 mph (up from 65) on I-84 east of The Dalles, and 65 mph (up from 55) on several other state and U.S. highways in central and eastern Oregon. (For details on which speeds will be legal where, see

West of the Cascades the top legal highway speed limits stay unchanged: 65 on the freeway and 55 on other roads.

But as drivers know, the actual average speed on most rural sections of Interstate 5 is somewhere around 75 as long as no troopers are in sight, which is almost all the time. Many years ago the legislature authorized the Transportation Commission to raise the legal limit on I-5, but the commission has refused for reasons of safety.

Murphy, the Bend-based ODOT public information officer I spoke with on the eastern Oregon change, reminded me that as the speed increases, the forces involved in collisions rise exponentially. That’s something we all had better keep in mind as we hurtle toward each other on our two-lane highways, not just east of the Cascades but everywhere we drive. (hh)


4 responses to “A question of speed and cost”