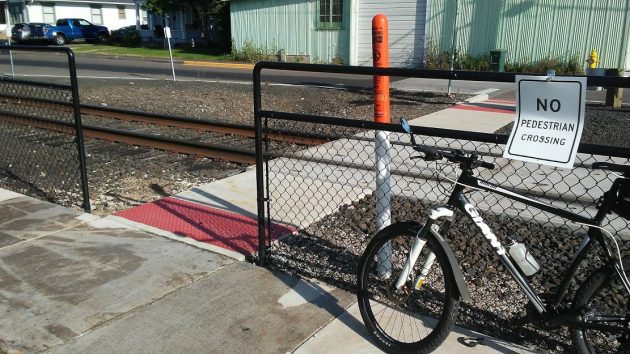 This sign caught my eye on Friday. It made no more sense than one like it two years ago.

In the Age of Corona and General Upheaval, you take your amusement where you can. So here’s something about an odd little sign. Actually two signs that looked about the same.

I had noticed the first one in April 2018 at the Portland & Western railroad crossing on Water Avenue at Hill Street. If that wasn’t a pedestrian crossing, what was it? 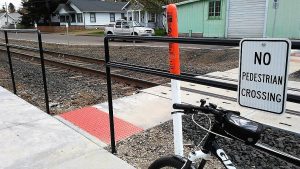 The sign there had been specified in the ODOT-Rail crossing order when the improvements were built. But it didn’t make sense. So I asked about it.

After checking with ODOT, Ron Irish, the Albany city transportation systems expert, took a wrench down to the crossing and removed the sign. A little story about all this appeared here on April 19, 2018.

So I was astonished when I happened to spot the same sign — actually not the same but one like it — back in the same spot on Friday. It didn’t make any more sense than two years before. Contrary to the signage, that clearly is a place where pedestrians are meant to cross the tracks.

Once again I got in touch with Ron Irish. “I’ve got no idea how that sign ended up back there,” he replied on Monday, working from home because of corona restrictions at City Hall.

He checked with the city’s street crew to see if they had anything to do with the sign. That came back negative, and Ron said the crew would take it down. By the time the bike took me past the crossing again in the afternoon, the sign was gone.

Irish had another idea: “I’m checking with our inspectors to verify that it wasn’t perhaps reinstalled as a one-year warranty item with the (Edgewater Village) subdivision. If that’s not the case, the only other idea I can think of is that (the Portland & Western Railroad) put it back up thinking they were  responsible for the sign’s maintenance.”

If that’s so, then maybe this puzzling message will make a comeback yet again. (hh)


5 responses to “A puzzling tale about an odd little sign”