A crossing puzzle: No pedestrians? 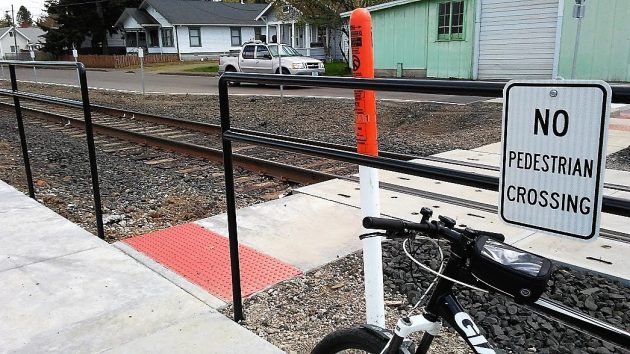 If that’s not a pedestrian crossing, what else could it possibly be? That was my question when I saw this sign Wednesday at the newly completed railroad crossing at Hill Street and Water Avenue in Albany.

Puzzled, I posed the question to Ron Irish at City Hall. He’s the city’s transportation systems analyst and everyone’s go-to guy on all matters relating to streets, traffic, bikeways and pedestrian crossings.

At first he thought it was just a case of a sign put in the wrong place by mistake, owing to a change in plans at the Edgewater Village development. Originally, those plans apparently would have closed the Hill Street crossing and provided access at Madison Street one block to the west. Instead, Hill became the main access and the Madison Street crossing was closed.

But then, upon further checking, it developed that the sign is intentional. It is shown in the crossing order issued for this project by ODOT-Rail, which has jurisdiction over traffic signs at rail crossings.

Irish figures that since there’s a jog in the sidewalk on Hill, ODOT assumed people would be tempted to go straight without the warning sign. But, he says, “given the railing and all the other visual clues I’m pretty convinced Albany pedestrians are capable of finding and using the correct route.”

So he removed the sign this morning, took a few photos and plans to ask ODOT to drop the sign from the crossing order.

Late this afternoon, on Thursday, Ron Irish sent me this: “ODOT-Rail agreed to let us remove the ‘no ped crossing’ sign. Good thing, because I pulled it this morning.”


5 responses to “A crossing puzzle: No pedestrians?”