A promising oak gets whacked 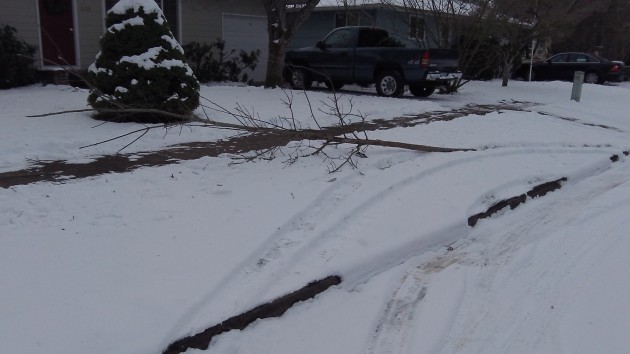 The scene of the deed on Monday afternoon.

It’s hard to know what to think about this. But these are the facts. Sometime between Sunday afternoon and mid-day Monday, somebody drove his vehicle on to the curb in the 1400 block of Albany’s Southwest Seventh Avenue, ran over a young oak growing there, steered off the curb in one smooth turn and drove off.
The oak was one the city of Albany had planted as part of its street tree program in 2010. In the years before, two other attempts to get shade trees established in that spot on the parking strip had failed, the first because the property owner left town on a short vacation and thus failed to water the tree during a heat wave, and the second because the replacement for the first never got going in the difficult ground.

This oak, though, was showing promise. It had reached about 20 feet in height and, after a slow start in the spring, had developed an ample crown of new branches and leaves. In the fall, it stubbornly held on to its foliage until just a few weeks ago. And then somebody drove over it and snapped the trunk off at the ground.

If it was an accident, the driver committed a hit and run. If it was deliberate, he destroyed public property in which the city had invested no little amount of work. Either way, he should be at least a little worried about being found out. He left a part from the vehicle at the scene, and a paint smear as well. (hh)


2 responses to “A promising oak gets whacked”