A praying mantis on that distant roof? 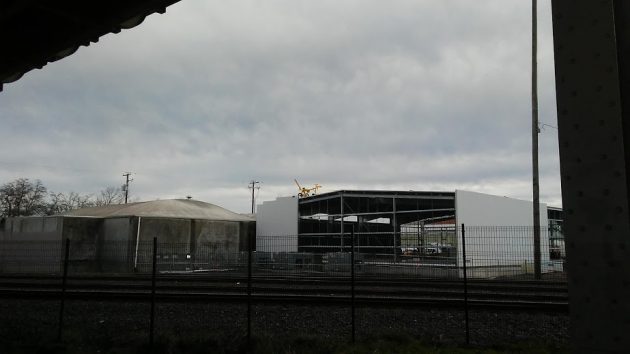 What’s that odd-looking yellow contraption up on the roof in the distance? It caught my eye on Jan. 25 as I was standing under the Pacific Boulevard viaduct in Albany and looking around.

Taking a slightly closer look, by means of my phone’s digital zoom, you get the idea that it’s a mobile crane suitable to be rolled and steered around on more or less flat roofs of buildings under construction: 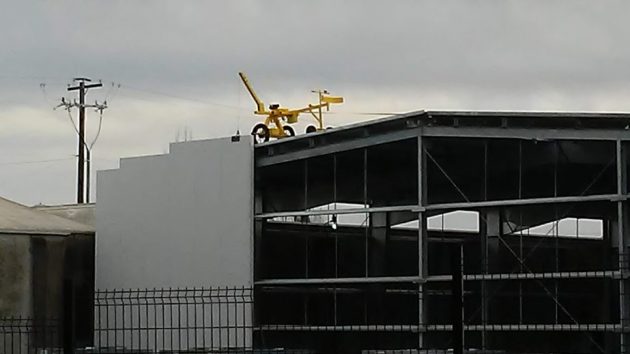 That building, by the way, is part of the expansion taking place at the Van Vleet meat and food distribution company on the south side of the viaduct, on Jackson Street at the corner of Ninth.

The company, which distributes food and other restaurant supplies to outlets within 45 minutes of Albany, is building an 8,700-square-foot cold storage and freezer building so it can keep up with its growing business.

Paperwork on file with the city shows the cost of this project to be about $2.7 million. Last July, the city council voted unanimously to loan the company $744,000 at 4 percent for up to 20 years. The loan was to bridge the gap between a bank loan and the overall costs.  The loan money was to come from the city’s Pepsi settlement fund.

When they first talked to the council last April, Bill and Korey Van Vleet, two of the principals in the company, said the business was started in 1978 and had five employees by 1983. Now they had 23 employees and expected soon to hire more.

It was Saturday afternoon when I noticed that yellow praying mantis on the distant roof, sitting still. If I had seen it in action, I could maybe explain how it works. (hh)


One response to “A praying mantis on that distant roof?”